‘The Ex-Husband’ by Karen Hamilton 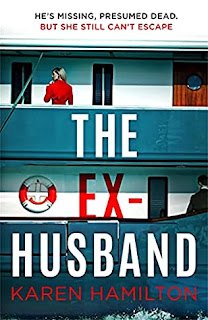 Charlotte and Sam: husband and wife, partners in crime. Until he abandoned her and disappeared with all their ill-gotten gains. It was the wake-up call Charlotte needed, and now, years later, she is building a new life and running a promising business as an events planner, this time on the right side of the law. But Sam turns up again – at least, evidence that he is dead has been discovered. But Charlotte doesn’t believe it, and with good reason.

In a bid to put distance between herself, her innocent friends and a series of small, threatening incidents which all point to Sam’s continuing manipulation of her, Charlotte takes a job on a superyacht in the Caribbean. But the incidents continue, and she realizes the danger has followed her – and Sam clearly isn’t working alone.

What follows is a taut, intricately plotted mystery in the here and now, interleaved with the story of the nefarious past Charlotte and Sam shared: how they became involved, the scams they pulled off while working on a series of luxury cruise ships, the people they conned and the difference in their attitudes towards them. There are plenty of questions to puzzle over: why did Sam decide it was time to walk away? What is the significance of the priceless emerald necklace which is the only thing Charlotte has retained from her criminal activities? Is there anyone she can trust? Who is her enemy aboard the yacht? And where does the mysterious Alexandra fit in?

For me, though, the novel’s greatest strength is the vivid depiction of the upstairs-downstairs social structure on luxury cruise ships. The paying customers spend every day at leisure, enjoying their sumptuous state rooms with jacuzzis and balconies. For the staff who service that leisure, it’s a million miles from a dream job with plenty of time to explore paradisical destinations; they work fourteen-hour days, and sleep in cramped cabins with bunks and no windows.

The mystery continues right to the final page, and the answer to most of the questions is the same: be sure your past will find you out. Will Charlotte ever be free to live the life she really wants? Read the book and discover for yourself.
------
Reviewer: Lynne Patrick

Karen Hamilton spent her childhood in Angola, Zimbabwe, Belgium and Italy and worked as a flight attendant for many years. Karen is a recent graduate of the Faber Academy, and having now put down roots in Hampshire to raise her young family with her husband, she satisfies her wanderlust by exploring the world through her writing.

Lynne Patrick has been a writer ever since she could pick up a pen, and has enjoyed success with short stories, reviews and feature journalism, but never, alas, with a novel. She crossed to the dark side to become a publisher for a few years and is proud to have launched several careers which are now burgeoning. She lives in Oxfordshire in a house groaning with books, about half of them crime fiction.
Posted by Lizzie at 17:33