‘The Image of Her’ by Sonia Velton 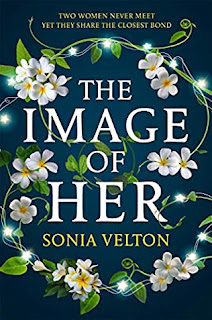 Two women, living thousands of miles apart, with totally different lifestyles. They've never even met, and never will, but after they both experience trauma and tragedy, they share a unique bond.

Stella is recovering from horrific injury and major surgery in which Connie has unknowingly played a vital role. She discovers Connie's Facebook page, with pictures of her young family and snippets about her expat life in Dubai, where her husband is on temporary assignment. Connie is finding her new life an uneasy fit; she is unused to the trappings of luxury and refuses to take part in what she sees as abuse of young women from Third World countries who work as domestics.

The recent past lives of the two women are interleaved, as Stella mentally recounts her own story to Connie, who will never actually hear it. We learn about Stella's harrowing life with her manipulative mother, whose dementia is only the culmination of decades of narcissistic pressure. Now her mother is dead, she has no one to confide in, so she confides in Connie, whose cheery Facebook posts tell a different story from the one Connie is really living through in Dubai. Her husband fails to understand why she misses her hectic but fulfilling life when she can have a self-indulgent one with few domestic responsibilities. The domestic help she reluctantly employs involves her in an underworld few expats become aware of, and she feels isolated and without support.

The way Stella's and Connie's worlds collide unfolds gradually, and is one of the few mysteries in the novel, so I won't give it away. There are moments of tension, and the greatest crime of all, man's inhumanity to man, or in this case woman, underpins both stories. But a crime novel it is not, in any of the genre's many guises. An eye-opener, and an evocative glimpse into two lives a million miles from my own - it's certainly that, and an absorbing and highly readable one.

I never know quite what to expect when I start reading a book by an unfamiliar author, but whatever vague idea was lurking in the back of my mind, it certainly wasn't what I got this time. If you're looking for an edge-of-the-seat thriller  you'll be disappointed; but approach it with an open mind and a desire to broaden your horizons, and you'll find something memorable and thought-provoking.
------
Reviewer: Lynne Patrick

Sonia Velton grew up between the Bahamas and the UK. After graduating from university with a first class law degree, she qualified as a solicitor at an international law firm, later going on to specialise in discrimination law. Sonia relocated to the Middle East in 2006. Eight years and three children later she returned to the UK and now lives in Kent.