A Favourite Book: 'The Caves of Steel' by Isaac Asimov - 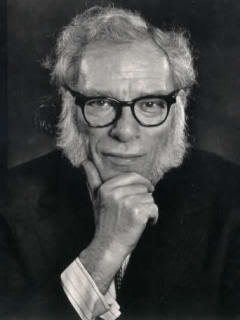 Isaac Asimov is best remembered nowadays for his books about robots and future galactic empires. But among his science fiction tales are some cracking good mysteries, crime stories set against a background of future time and place. The Caves of Steel  First published 1954 is one of the best.

It contains all the main ingredients of a classic whodunit: mysterious clues, suspense, and the spotlight of suspicion shifting between various suspects. The main sleuth is Lije Baley, a likeable plain-clothes detective; he comes complete with a nagging wife, a demanding  boss, and an over-bright sidekick whom he admires but doesn’t fully trust. He faces personal danger as he struggles to investigate brutal murders which could spark off a serious international incident.

The Caves of Steel sums up Asimov’s picture of a future New York City. whose inhabitants live and work in a vast underground warren. They’ve become so used to this that they are afraid to venture into the open air, and mostly they don’t have to; food is produced in subterranean farms, (it’s rationed, but nobody starves,) and energy comes from nuclear power plants. Water, air, transport, leisure…all are provided underground, using hi-tech solutions which, as always with this author, are not fantasy, but grounded in real science. Yet the people and their motives – love, hate, loyalty, jealousy, idealism, fear – haven’t changed anything like as fast as their surroundings.

Asimov paints the background with as much care and detail as any historical writer describing the Tudors or the Romans. A good science fiction story has a lot in common with a good historical one: they both draw us into an alien era, but one is looking to future time, the other to the past.

Lije Baley is pretty content with his lot; he has an attractive wife, a lively young son, and a job he likes, and the more promotion he earns, the better lifestyle he will have. His fellow New Yorkers too accept their somewhat ant-like existence…mostly. A few, the Medievalists, (what a beautifully anachronistic name!) are nostalgic for bygone days, when humans lived in cities open to the sky, and, they are sure, life was much better. And nearly everyone is hostile to the Spacers, who have a base near the city. When an important Spacer scientist is killed there, a crisis looms.

These Spacers are humans whose ancestors emigrated from Earth generations back, to colonise other planets in the Galaxy. By doing this they’ve become richer, freer, and longer-lived, and despise the stay-at-home city dwellers, who in return loathe their arrogant superiority. They have to keep Earth-dwellers at a distance, for fear of disease, so if they need to visit New York they stay sealed in their own base nearby, guarded by fearsome security and quarantine barriers. Well, you get the picture: the two sorts of humans rarely mix, and hate one another.

Lije Baley is ordered to investigate the Spacer’s death, because it’s assumed the killer must come from within the city. He is torn between a desire for justice and a gut feeling that the dead Spacer probably had it coming. His sense of justice wins, even when he finds that the Spacer authorities have insisted on assigning one of their own men to work with him on the case. And even when he finds that it isn’t a man, it’s a robot.

Yes, a robot – well, this is an Asimov story after all. Lije and his fellow-citizens hate robots, which are primitive as robots go, but still good for the simpler tasks, and they are gradually taking over people’s jobs. The New York police department has even hired a messenger-robot, Sammy, which has displaced a keen young trainee. But Lije’s new partner, Robot Daneel, is designed by Spacers, and is a far more advanced model. He looks and behaves just like a human detective, so he can live and work in the city without arousing public anger. He has some useful add-on powers – a faultless memory, enhanced powers of observation, and great physical agility which saves Baley’s life at one point. He has no emotions of course, and this makes him an unnerving partner, but he’s no threat to Lije or his fellow New Yorkers, because special circuits in his brain prevent his ever harming a human being. Or do they?

As Lije and Daneel comb the city looking for evidence and suspects, the policeman begins to feel a grudging respect for the robot. But his wife is horrified when she discovers Daneel’s true nature. How did she find out? Lije had carefully not told anyone, and Daneel makes a convincing human cop. Somehow the Medievalists have got to know there is a robot at large.  Is Lije’s wife a sympathiser? Is he in danger as a result?

There is indeed danger, including another murder, and Lije starts wondering just how reliable Robot Daneel really is. Could he be a killer? Or could the murderer be another Spacer, trying to stop his colleague’s researches? Did the backward-looking Medievalists have a hand in it, or perhaps the young policeman who lost his job to Robot Sammy?

Eventually the partners solve their case, and there are even hints of a way to end the conflict between city people and Spacers. It’s a satisfying conclusion.

I first read this book in the 1950s. Re-reading it now, I was pleased to find I enjoyed it just as much, though not necessarily for the same reasons. The mystery is still good, and the depiction of future New York, convincing in the ‘50s, in many ways still is. Inevitably it feels a bit dated, because some of the ideas have been overtaken by events. His police procedure, for instance: Lije and Daneel have access to huge databases on all citizens, and some very fancy brain analysis and psychological profiling, but there’s no DNA, no mobile phones, let alone access to the Internet through them…No matter. This is a period piece, or should that be a multi-period piece, and it’s still a good read.

Undoubtedly Asimov would have portrayed his caves of steel somewhat differently if he wrote about them today. Wondering just how differently gives the book an added dimension. …that’s an altogether different sort of mystery. 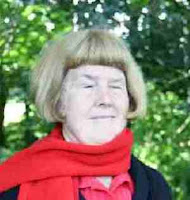 Jane Finnis read history at the University of London before working as a radio producer for the BBC.  Her four Roman mysteries are about life (and death) in first-century Roman Britain. They feature Aurelia Marcella, who runs an inn on the road to York, and keeps getting drawn into solving mysteries in what is still a new frontier province of the mighty Roman Empire. Jane now lives in East Yorkshire and spends her time researching and writing about the Roman Empire. To read a review of her most recent book A Pinch of Cunning click on the title.