‘Ask No Questions’ by Claire Allan 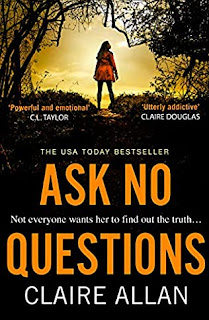 In 1994 ten-year-old Declan and Niall Heaney reported finding the floating dead body of Kelly Doherty who had gone missing on Halloween.

It is now twenty-five years later and Ingrid Devlin, a journalist for The Chronicle is researching the story on the anniversary of Kelly's death. Jamesy Harte was found guilty and served his time, he was released from prison eight years ago. He always maintained his innocence and Ingrid wants to look into it deeper, but her editor is not taken with the idea and refuses to give her permission to run the story. Ingrid decides to investigate for her own satisfaction, she always thought his arrest felt wrong.

Although he has changed his name, she manages to track Harte down and on talking to him is convinced he is innocent, but how to prove it?

Ingrid then chats to both Niall and Declan the twin boys. They grew apart after finding the body and seldom see each other now. She feels they are both keeping something from her. As she digs deeper, threats are made, she has her car vandalised and her apartment is sprayed with red paint leaving a warning message not to dig deeper. Although it shakes her up rather, Ingrid is determined to get to the truth especially as someone is going to great lengths to try and stop her.

She gains permission to talk to Kelly's family and hear their side of the story. An unknown person is obviously worried about what they may divulge as Kelly's father Liam is beaten up.

When there is a suspected murder, Ingrid is convinced that she must be getting nearer finding out what really happened all those years ago, but who can she trust. Even her boss is acting strangely.

Then she is lured into the woods where Kelly's body was found. Will she find the truth at last or is there something more sinister awaiting her?

A thoroughly absorbing story about a journalist’s determination to set the records straight and prove one way or the other whether the accused was guilty or not. Greatly recommended.
------
Reviewer: Tricia Chappell

Claire Allan born 1976, is from Northern Ireland. She married an English man and has a son and a baby daughter.

Tricia Chappell. I have a great love of books and reading, especially crime and thrillers. I play the occasional game of golf (when I am not reading). My great love is cruising especially to far flung places, when there are long days at sea for plenty more reading! I am really enjoying reviewing books and have found lots of great new authors.
Posted by Lizzie at 13:32