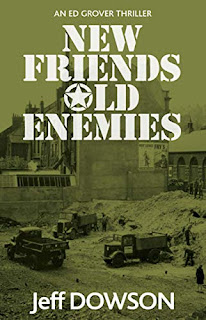 In 1950 Sergeant Major Ed Grover of the US army is stationed outside a bombed and battered Bristol. His commanding officer suggests him for the role of liaison officer for the Bristol Javelin project, a task that involves Ed meeting local dignitaries and fixers including Sam Nicholson. Sam is the leader of Bristol city council, and he colludes with con man, Rodney Pride, to get him good deals on parcels of derelict land and bombed sites. Rodney’s latest deal is to buy an old scarlet fever hospital and use it to house women expecting illegitimate babies.  He plans to sell the babies to those who are desperate for a baby but can’t have one of their own.

Ed is smitten by Mel who works for the Bristol law firm of Fincher Read and Holborne. Driving along behind Mel in Bristol one day Ed witnesses an accident in which an American, Private Bradley Parson, is killed.  Private Parson has been AWOL for several days.  He had a packet of ‘bennies’ i.e. Benzedrine tablets in his pocket.  The doctor at the hospital gives Ed 24 hours to come up with a legitimate reason for the pills presence in Parson’s pocket before she calls the police.  Parson also had a photo in his pocket that Ed assumes is the GI’s local girlfriend.

When two young law clerks start searching for the girl in the photo one of them is blown up in her car. At this point the English police, DCI Bob Bridge and DS Tom Goole, become involved. They know Ed from a previous investigation. Ed’s bosses want to fly Parson’s body back to the US as soon as, and they don’t want the British involved –a GI distributing drugs around England would do nothing to improve the ‘special relationship’. So, rather than confide in the English police, Ed seeks help from Daniel Zampa, the crime supremo in Bristol. With help from old friends Ellie and Arthur Morrison, Ed traces the girl in the photo.  She was pregnant, and thinking Parson had deserted her, she has gone to the now fully functional, clandestine maternity hospital set up by Rodney Pride.

New Friends, Old Enemies weaves a complicated tale against a backdrop of the lives of those in post-war Bristol and the frustrations of the American soldiers waiting to be repatriated.  Ed Grover is full of empathy for those who have suffered, and you feel for him when a nasty sting in the tail brings his sleuthing to an end. Thankfully, as he’s the sort of character you’d like to be happy, his relationship with Mel looks good.
------
Reviewer: Angela Crowther.

Jeff Dowson began his career working in the theatre as an actor and a director. From there he moved into television as an independent writer/producer/director. Screen credits include arts series, entertainment features, drama documentaries, drama series and TV films. Turning crime novelist in 2014, he introduced Bristol private eye Jack Shepherd in Closing the Distance.  The series developed with Changing the Odds, Cloning the Hate and Bending the Rules. The Ed Grover series, featuring an American GI in Bristol during the years following World War 2, began with One Fight at A Time.  The second book New Friends Old Enemies has just been published. Jeff is a member of BAFTA and the Crime Writers Association.
www.jeffdowson.co.uk

Angela Crowther is a retired scientist.  She has published many scientific papers but, as yet no crime fiction.  In her spare time Angela belongs to a Handbell Ringing group, goes country dancing and enjoys listening to music, particularly the operas of Verdi and Wagner.
Posted by Lizzie at 14:17