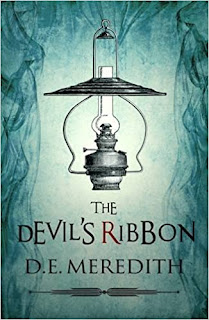 Set in Victorian London this tells of murder, rioting and early forensic science.  Adolphus Hatton works in the mortuary of St. Bart's Hospital with his diener, trusted assistant Albert Roumande.  Whilst working with the victims of the latest cholera outbreak he is asked to look at the body of an Irish unionist MP, Gabriel McCarthy, thought to have been another victim of the disease.  What he finds is murder, anti-English plots and an enticing Irish widow.

With his assistant, Albert, and a willing apprentice, Hatton explores the mystery of how Gabriel died and why his death was made to look like cholera.  His main clue is a green ribbon found in the dead man's mouth.  Alongside the rather detestable, ambitious and overly pretentious Inspector Grey he digs into the underbelly of poverty and resentment that makes up London's Irish community.  More bodies start to stack up in Hatton's mortuary, whilst he investigates who seeks chaos and revenge from the British.

This is a nicely researched tale with some quirky characters which are rounded and well explored, if at times thoroughly unpleasant.  The main protagonist, Hatton, is clever, but has flaws and suffers from some quite modern type of issues like budget problems and staffing issues.  Amongst the gruesome there is also seem light humour and a little romance.

This is the second book in the series by D.E.Meredith, with an interesting story, cleverly plotted narrative and a London that anyone who has read Dickens will recognise and relate to.  The forensics and chemistry are carefully researched, and the storyline reads well.  A good read and one which will make the reader look forward to the next instalment
----
Reviewer: Amanda Brown

D.E. Meredith read English at Cambridge, then ran the press office and the land mines campaign for the Red Cross, travelling extensively to Bosnia, Afghanistan and Rwanda during the conflicts. She worked as a consultant on media relations for Greenpeace and other worthy causes before embarking on "The Hatton and Roumande Mysteries" series for St Martin's Press (Devoured, Oct 2010, The Devil's Ribbon is her second book.  She is married with two boys.