A Favourite Book: A Thief of Time by Tony Hillerman 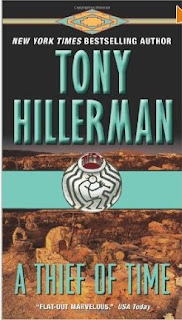 In 2013 I met an anthropologist called Bob who told me he had played poker with Tony Hillerman. I was thrilled. Here was a living link with a great crime fiction writer, one who became an official Special Friend of the Dineh - the Navajo people - and on a much less noteworthy level, inspired me to write about Africa.

I suppose it was inevitable that this – reportedly Hillerman’s own favourite book - would also be mine, focusing as it does on the sometimes cut-throat world of academic archaeology, on that all-consuming lust for the first, the oldest, the best – or in this case – well, I’d better not give the game away.

But the other reason this book speaks to me is its context. The Navajo culture, the Navajo Nation. The magnificent landscapes of the USA’s south-west: flat-topped mesas under looming thunder-clouds, remote canyons lit by a pale moon, ancient cliff-dwellings evocative of the vanished, enigmatic Anasazi people.

Hillerman’s protagonists in this book are an older, less traditionally centred Navajo Tribal policeman and a younger more spiritually inspired colleague. The older man is on an emotional journey after losing his wife, the younger finding his way in a world that pulls him in different cultural directions – and a love-life that does the same.

We empathise with both Navajo detectives, such is Hillerman’s skill, but we also find the characters of the anthropologists (archaeologists in British English) completely credible. The thirst that drives them, that stirs up the negativity that is their undoing is well observed. Greed, love, human frailty and clashing cultures are recurring themes. He was not just playing poker with those anthropologists.  The atmosphere is at times eerie. An episode in a remote canyon, at night, with frogs, preys on my mind. How did he come up with that idea? Did he see someone do it? Did he imagine it?

I once read that Hillerman kept a manila folder, where he dumped many first chapters. That his stories would sometimes develop in ways he had not intended as a character – or a dog – behaved in a way that altered his plans. I wonder if those frogs... but I will never know. The author died in 2008.

There are other Hillerman novels that might be a better introduction for the first timer, The Dance Hall of the Dead, perhaps, but to me this will always be his finest.

Did I mention, by the way, that I’m married to an archaeologist? An American? Ah, well, now you know. 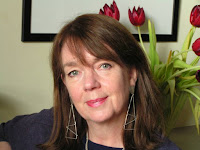 Mary Earnshaw  was born in Lancashire, grew up in Yorkshire and read history at Oxford. She then  became a technical journalist specialising in telecommunications. Various management and consultancy roles led to a directorship in a utility company, but she continued to write on a freelance basis. Mary now runs a small academic publishing company which allows her to take off for Africa every now and again. Mary first visited Africa - Zimbabwe and South Africa - while working for Philips in the Netherlands. The following year, in Swaziland, on a dig near the Mozambique border, she met her husband, Professor Larry Barham, and for the last 19 years they have been visiting Zambia where he now does his research and where A Wake of Vultures, the first of a planned series featuring Professor Lizzie Lamb, is set.
Posted by Lizzie at 14:09