In Murder Will Out, the first of my series of novellas featuring Agatha Christie, the police officer at the crime scene turns to her, wondering how it was that the dead man was found poisoned in the library, and says, well, Mrs. Christie. You know about these things - what do you think? And she replies, ‘I know nothing about real life murder, Inspector. I just tell stories.’

When I was asked to consider writing a series with Agatha Christie as the detective, my first response was to say no. Firstly, because I’ve never written historical fiction before – all my previous work happens firmly in the present, with Sister Agnes my detective nun working in a homeless hostel in London, and Berenice Killick being a senior police officer based in Kent. And, secondly, because Agatha Christie is a real person, and I thought, how can I write fiction about someone who actually existed?

But this challenge proved to be inspiring. To play with the relationship between what is ‘real’ and what is fictional has been a great opportunity. The second in the series starts with a man found shot dead on the tennis courts of a hotel in Cornwall, where Agatha is staying. The hotel is fictional, and clearly Agatha Christie never actually stayed there, let alone became party to a murder investigation there. But the facts of her life in June 1925 are, I hope, correct.

I was determined in these stories not to trespass unnecessarily on details of Agatha Christie’s life. I have sketched in only what I have needed, about where she was living, her husband, her daughter, her childhood memories. The rest, as always in my work, is about what I can imagine.

In the Sister Agnes stories, there usually comes a point when one of the characters says, ‘if this was a story, then it would all be simple, but of course we’re stuck with this being real life.’ It is an idea I have circled throughout my work, the nature of the ‘real’ within fiction, what it is to tell the True Story – and these novellas have been a wonderful opportunity to explore that.

There is a moment in the latest Agatha Christie story, the second in the series, where someone accuses her of playing parlour games in her work, of not reflecting the true harm and grief of murder. And in reply, she says, she makes no great claims for her work. ‘People enjoy detective fiction,’ she says, knowing that after the horrors of the First World War, which she too witnessed, she understands how her readers want calm, and order, and justice.

Only Agatha Christie can write an Agatha Christie story. But writing her as a character has been an opportunity to reflect on what it is to find the truth within fiction - as well as to pay tribute to someone who is the mistress of our craft. 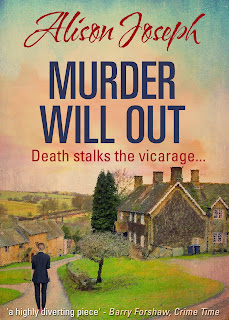 1923. The Great War is over, but the ghosts of the dead still linger.
Agatha Christie was one of the lucky ones - her husband returned from the conflict - and for her, and her local neighbours, life has resumed.
Agatha is beginning to gain some notoriety for her crime writing and she is busy working on her latest novel.
But then her neighbour tells her there has been a real ‘murder at the vicarage’ - a young man, Cecil Coates, has been poisoned, and due to Christie’s expertise in the crime genre, the
neighbourhood wants her to investigate.