‘The Vacancy’ by Elisabeth Carpenter 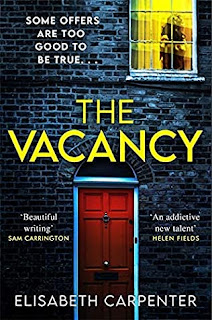 There are two things you can be certain of when you pick up a new novel by Elisabeth Carpenter. One, it will be quite different from anything else she’s written. And two, whatever you think you’re being led to expect, you’ll get something else, but you won’t be disappointed. Misdirection is a speciality of this talented author.

In The Vacancy, it’s clear from the outset that Rachel, the protagonist and main narrator, has a past that she wants to keep under wraps. She has taken a live-in job as assistant and secretary to a well-known author, apparently to escape from her family, whose calls she keeps ignoring. But nothing in a crime novel is ever as simple as it seems.

Dorothy Winters, the author, is eccentric to say the least, and has a great many equally bizarre, and rather noisy, friends who visit regularly, much to the annoyance of Gordon, the slightly creepy next-door neighbour who claims to be training as a private detective. Rachel’s job consists mainly of typing up Dorothy’s new novel from her handwritten drafts, but there’s also research, and taking part in some of the entertainment Dorothy arranges for her friends. After a curtailed murder mystery evening, Brett, a regular visitor, goes missing, and Rachel finds the bathroom covered in blood...

Who is Rachel, and what is the secret past she is so keen to conceal? Why does Dorothy’s novel start to bear a spooky resemblance to that past? What is Gordon really up to? And why are there cameras all around the house?

A page-turning mystery to solve, a cast of colourful characters all drawn with the skill of the veteran, Carpenter is fast becoming, and something strange going on under the surface – these are all elements her growing number of fans have learned to expect. All three factors are present here in spades. Some of the secrets and agendas are revealed as the narrative unfolds; others remain under wraps until the last minute. And naturally, there’s a kicker in the final paragraph which I guarantee will make you gasp as it did me. Elisabeth Carpenter is rapidly becoming a force to be reckoned with in crime fiction.
------
Reviewer: Lynne Patrick

Elisabeth (Libby) Carpenter  lives in Preston with her family. She completed a BA in English Literature and Language with the Open University in 2008. Elisabeth was awarded a Northern Writers’ New Fiction award and was longlisted for Yeovil Literary Prize (2015 and 2016) and the MsLexia Women’s Novel award (2015). She loves living in the north of England and sets most of her stories in the area, including the novel she is writing at the moment. 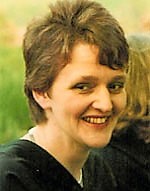 Lynne Patrick has been a writer ever since she could pick up a pen, and has enjoyed success with short stories, reviews and feature journalism, but never, alas, with a novel. She crossed to the dark side to become a publisher for a few years and is proud to have launched several careers which are now burgeoning. She lives in Oxfordshire in a house groaning with books, about half of them crime fiction.
Posted by Lizzie at 17:14