‘The Gilded Edge’ by Danny Miller 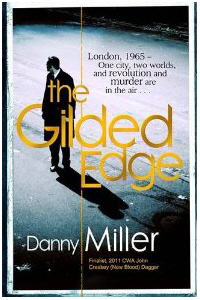 The book takes place in London in 1965. It is a rather surreal experience to read a historical thriller set in a period that you lived through! One centre of events is a gambling club so unless you were into upper class society of the sporting sort you would be unlikely to have relevant memories. Alternative settings are Notting Hill drinking dens and Soho night clubs. The background period detail is well applied - girls in a club have their hair ‘piled as high as structurally possible’ and a roll-neck black sweater is described as seeming ’like a tube of liquorice wrapped around her long, elegant neck’. The author likes a pithy phrase - ’he looked as welcoming as a parking ticket’, there was a view of ’the Thames running amok through the city’ and ’they had the measure of Lucan’s intellect, and it was scraping somewhere along the bottom’. That last reference brings me to the characters of this book.

There are generic characters reminiscent of those known in that era - a Malcolm X copyist, a successful fashion photographer, various wealthy ex-publicschoolites - but one real inhabitant of sleazy society is used and that is Lord Lucan but in a minor role.

The adventures of Detective Vince Treadwell as he attempts to decipher two murder mysteries - of a playboy in Belgravia and of a young black nurse on the wrong side of town - are thrilling indeed. He finds himself embroiled in a sequence of violent events exuding passion and menace. The gambling theme is maintained throughout in various forms; the relatively straightforward playing of card games, the dicing with death of drug taking and the dangerous methods that Treadwell uses to find out the truth. The 1960s is represented here in one of its guises with a suave sharply dressed detective moving through all levels of society sometimes with a switchblade in his pocket. The conclusions eventually reached prove to be suitably shocking and immoral. This is a clever thriller.
-----------
Reviewer: Jennifer Palmer
Danny Miller has published a previous book about Detective Vince Treadwell entitled Kiss me Quick.

Danny Miller was born in Brighton and studied English and Drama at Goldsmiths, University of London. As a playwright he's had his worked performed at the National Theatre Studio, the Bush Theatre, and the Theatre Royal Stratford East. As a scriptwriter he's worked for the BBC, ITV, and Chanel 4.