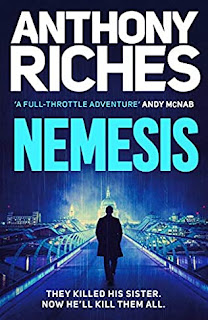 If ever a book was aptly titled, it is this one. It’s hero, Michael – Mickey – Bale’s aim in life is to obtain retribution for his fun-loving young sister who died after taking two lethal ecstasy pills supplied by gangland boss Joe Castagna. Simply put, it is Mickey’s intention to kill Joe and the numerous thugs who work for him. Anonymous texts from someone calling themselves ‘Nemesis, supply Mickey with helpful insider information on how Joe’s businesses operate.  An old school friend, Martin, supplies Mickey with weapons.

Mickey adores his wife Roz. She understands, but dislikes, his craving for excitement and is constantly threatening to leave him if he insists on leading such a potentially dangerous life - these are no idle threats. In his day job Mickey is a sergeant in the Met’s close protection squad. For obvious reasons he can’t tell Roz whom he is protecting whilst working officially, but neither does he tell her about his clandestine activities against London’s gangsters.

Mickey is assigned to protect the Defence Secretary, Sir Patrick Sutherland. Whilst at Sir Patrick’s country home, Mickey spots and collars Tamara, a photographer with The Clarion. Later he unwisely uses her to publicise another aspect of Joe’s evil empire, the trafficking of young foreign girls as sex slaves. Sir Patrick and his entourage, including Mickey, Constable Wade, and the enigmatic Major Cavendish who passes as a private secretary to Sir Patrick, but is clearly much more, are packed off to Belize where the minister is supposed to give a speech reassuring the locals that Britain won’t desert them.  The Chinese, who are anxious to gain influence in the region, object to the minister’s visit and do their best to assassinate everybody on the British delegation. Fortunately, an elite quartet of independent troops have also travelled with the minister.  Later, there is a huge fire fight in a London when the minister’s motorcade is attacked whilst on route to see the US Ambassador.

Meanwhile, Joe has discovered Mickey’s identity and kidnapped Roz.  Mickey goes for broke. With the help of drinking buddies from the pub and the independent quartet of troops from the Belize trip - along with weapons they’d culled from the UK’s spooks store - he raids Joe’s headquarters.  All hell is let loose

There are no dull moments in Nemesis. Mickey is a credible and likeable hero in this gritty, swashbuckling, adventure story. Whilst Joe Castagna and his cohorts are horrible individuals who seems to relish torturing those who displease them, it has to be admitted that Mickey and his friends are not afraid to kill for a good cause.  I thoroughly enjoyed the book and very much hope we hear more of Mickey Bale.
--------
Reviewer Angela Crowther

Anthony Riches  began his lifelong interest in war and soldiers when he first heard his father's stories about World War II. This led to a degree in Military Studies at Manchester University. He began writing the story that would become Wounds of Honour after a visit to Housesteads in 1996. He lives in Hertfordshire with his wife and three children.

Angela Crowther is a retired scientist.  She has published many scientific papers but, as yet no crime fiction.  In her spare time Angela belongs to a Handbell Ringing group, goes country dancing and enjoys listening to music, particularly the operas of Verdi and Wagner.
Posted by Lizzie at 20:12