A Favourite Book: ‘The Woodcutter’ by Reginald Hill 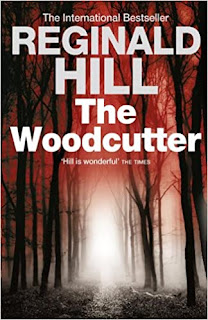 Sometimes you just know that a book is going to stay with you long after you finish reading it.

Reginald Hill became one of my top five authors the first time I picked up a Dalziel and Pascoe. He will always be best known for that series, an object lesson in how to turn a police procedural into something much more interesting; but for me this truly great crime writer achieved his peak a couple of years before his untimely death with a standalone.. At nearly 200,000 words The Woodcutter is a bit of a doorstop, but I read it the first time over a weekend, which places it firmly in the page-turning category.

At its simplest it could be called a tale of revenge. Having risen through his own gargantuan efforts from humble origins to become a hugely successful entrepreneur, Wolf Hadda’s life crashes around him when he is found guilty of a whole raft of charges including massive fraud and paedophilia. He spends years in prison claiming his innocence; then, having manipulated his way to freedom, he sets out to clear his name and ensure justice is done.

But it soon becomes clear that simple is one thing this book is not. Wolf’s past is a multi-layered tapestry which keeps revealing new details and aspects. Many of the characters, especially Wolf himself and Alva Ozigbo, the mixed-race prison psychiatrist who is drawn deep into his case and his life, are complex and sometimes bewildering. The plot, if that’s the right word, is positively labyrinthine, and full of surprises.

All the same, Reginald Hill had an immense and enviable talent for plain old-fashioned readability. However baffled I was, I was also fascinated, intrigued and thoroughly involved, and I kept right on reading.

It’s a book I will return to, confident that on the second, fifth or twentieth reading I’ll still be finding new twists, new depths, new things to relish. Rest in peace, Reg, and in the knowledge that you won’t be quickly forgotten.

Reginald Hill died in 2012, having collected or been nominated for just about every available crime writing honour, including the CWA’s Diamond Dagger lifetime achievement award, in the course of a 40-year career. In that time he wrote the six-book Joe Sixsmith series, nearly thirty standalones and several volumes of short stories, as well as the twenty-four Dalziel and Pascoe police procedurals (sort of!) for which he is best known.

All his work is characterized by a gentle wit, a prodigious imagination and an incisive intelligence. If ever a crime writer deserved acclaim simply as a great writer regardless of genre, Reg Hill was that writer. His death left a large gap in the lives of his many readers.

Lynne Patrick has been a writer ever since she could pick up a pen, and has enjoyed success with short stories, reviews and feature journalism, but never, alas, with a novel. She crossed to the dark side to become a publisher for a few years, and is proud to have launched several careers which are now burgeoning. She lives in Oxfordshire in a house groaning with books, about half of them crime fiction.