‘The Herring in the Library’ by L C Tyler 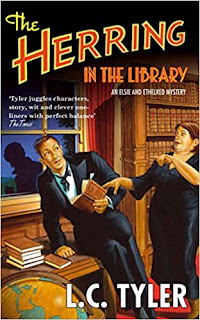 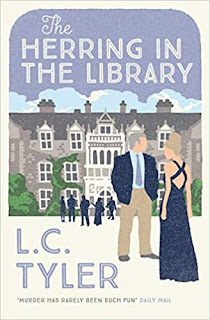 When writer Ethelred Tressider bumps into Rob (Shagger) Muntham outside the village Post Office, last seen considerably inebriated celebrating his degree, he expects nothing more than a quick nod, but having advised Ethelred that he is now Sir Robert Muntham of the large pile up the road called Muntham Court he invites himself into Ethelreds bijou residence - a couple of rooms across the village green.  Following this accidental meeting Robert adopts the habit of dropping in on Ethelred, but tonight Ethelred accompanied by his agent Elsie Thirkettle are to dine at Muntham Court. Elsie has mistaken ‘dine at their estate’ for ‘they live on an estate’ and has a sort of Gypsy Rose Lee meets Vivienne Westwood outfit which gave me an instant picture of Elsie.

Arriving at Muntham Court their host is surprisingly absent, but Lady Annabelle Muntham leads them to meet the other guests - a somewhat diverse crew. Colin and Fiona McIntosh who seem quite at home helping themselves to a drink, Clive Brent, a former banking colleague, the writer Felicity Hooper, whose book it transpires Elsie had turned down as a non-starter, which has subsequently made copious amounts of money - oops, and Gerald and Jane Smith.  When Robert does appear, he seems in a strange mood and makes a toast to his chums, promising them an evening none of them will forget.  Shortly afterwards he is found strangled in his locked study.

This is the classic whodunit, with a good cast of suspects whose motives gradually come to light, as Ethelred investigates at the request of Annabelle Muntham. But above all it is a fun read. The story is told by Ethelred and Elsie in alternate chapters. They are marvellous well-fleshed out characters, who you so want to meet. The prose is witty and beautifully delivered.  This book is highly recommended, and whilst I await the next instalment of Ethelred and Elsie I will catch up on the earlier ones – you should do too, if you haven’t already.
-----
Reviewer: Lizzie Sirett

L. C. Tyler was born in Southend, Essex, and educated at Southend High School for Boys, Jesus College Oxford and City University London. After university he joined the Civil Service and worked at the Department of the Environment in London and Hong Kong. He then moved to the British Council, where his postings included Malaysia, Thailand, Sudan and Denmark. Since returning to the UK he has lived in Sussex and London and was Chief Executive of the Royal College of Paediatrics and Child Health for eleven years. He is now a full-time writer. His first novel, The Herring Seller's Apprentice, was published by Macmillan in 2007, followed by A Very Persistent Illusion, Ten Little Herrings, The Herring in the Library, Herring on the Nile, Crooked Herring, Cat among the Herrings and Herring in the Smoke, . The first book in a new historical series, A Cruel Necessity, was published by Constable and Robinson in November 2014. Since then he has published five further books in this series. The latest being Death of a Shipbuilder.

His latest Ethelred and Elsie is Farewell My Herring