The Cambridge Murders by Glyn Daniel 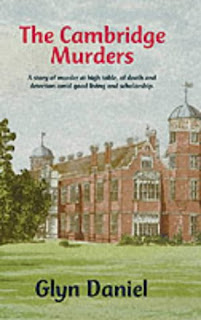 The President of Fisher College, Cambridge, is elderly and frail and the main business of running the College falls to the Vice-President, Sir Richard Cherrington, the eccentric but eminent Professor of Archaeology. Even the shrewd and active Cherrington is slightly daunted when, early in the morning on the last day of term, the night porter, Gostlin, is found dead. It appears that he was shot while doing his rounds and the murder weapon has disappeared.

To Cherrington's dismay, the Dean of Fisher College, Dr Landon, has also vanished; a strange disappearance as Landon, a rigid churchman, had shed his clerical collar and did not seem to be wearing any shoes. Landon is a very unpopular man; a rigid and often unjust disciplinarian, which makes it likely that he too has been murdered. However suicide is also possible as, a few hours earlier, he had confided in Cherrington that his wife, Anne, had told him that she was in love with Evan Fothergill, one of the younger Fellows of the College and that she wanted a divorce.

Although horrified at the damage to the College's reputation and determined to protect all those under his care, Cherrington is also rather pleased at the opportunity to see if the analytical brain of a scientist, combined with the trained visual memory of an archaeologist, can help him to solve the crime. Apart from one foolish concealment for which he has to apologise, Cherrington co-operates with the police; first a local detective and then a Superintendent from Scotland Yard, but he also investigates independently. He successfully clears the name of one unfortunate undergraduate who had fallen foul of Landon's inflexible and mean-spirited discipline but sometimes his clever solutions lead him astray and offer suspects a plausible explanation for their conduct. '”If you say so, Richard, of course it is.” Her reaction surprised him. She burst out laughing, almost hysterical laughter. “All right. Let's go and tell the police the truth. Let's go at once.”

Sir Richard was startled. “It is the truth, of course, isn't it?” he said. “The time for misleading the police is surely over, if it ever existed.”

“Yes, it's the truth,” she said almost gaily. “It is all just as you said. You've been very clever, Richard – very clever indeed.”

In all of Cherrington's investigations, it never occurs to him that Detective Superintendent Robertson-Macdonald of Scotland Yard has Cherrington himself high on his list of suspects, especially when Cherrington, following his own line of enquiry, adds to the doubts against him. “Sir Richard Cherrington has slipped through our hands to France,” said Robertson-Macdonald. “But he is being watched there very carefully by my man, Rougemont. He went there allegedly to visit archaeological remains in Brittany. But at the moment he is behaving in a peculiar way in Rouen and Chartres.”

“I believe he will possibly disappear.”

One of the most chilling aspects of the book is that the Superintendent's suspicions about Cherrington have been fuelled by an old lover of the archaeologist, a woman who still greets him with affectionate friendliness, but who suggests to Robertson-Macdonald that Cherrington was capable of committing murder. '”I sometimes think he might do something extraordinary just to show how clever he really was.”' As a cameo of malice and jealousy, cunningly concealed, this scene is perfect.

In the end Cherrington bases his solution of the crime on the psychology of the suspects and works out who was psychologically capable of committing this particular crime and whether they had the opportunity, which leads him to the culprit, just one step ahead of the police.

As with many books of the period that are set in the College of an University, the start of the book is quite complicated, with a large number of characters introduced in the first chapters. However the main protagonists are clearly defined and easy to identify. The crime is a complex, intellectual who-dunnit, with a central character who is intelligent and likeable, mainly because he is fallible despite his academic brilliance. The Cambridge Murders is a very enjoyable read for anyone who likes the classic Golden Age Mystery.
-----
Reviewer: Carol Westron

Glyn Daniel (23 April 1914 – 13 December 1986) was a Welsh scientist and archaeologist who taught at Cambridge University, where he specialised in the European Neolithic period. He was appointed Disney Professor of Archaeology in 1974 and edited the academic journal Antiquity from 1958 to 1985. In addition to early efforts to popularise archaeological study and antiquity on radio and television, he edited several popular studies of the fields. He also published mysteries under the pseudonym Dilwyn Rees.