‘Murder in Outline’ by Anne Morice 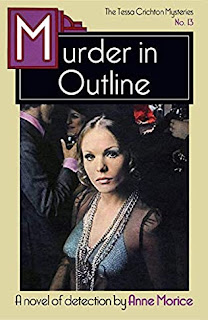 Actress-detective Tessa Crichton is enjoying one of her ‘rest periods’ staying with her cousin Toby at his house at Roakes Common, when a visit from her husband Robin, who is a detective at Scotland yard, bring a bundle of mail that includes an invitation for her to be one of the judges at the annual in-house talent competition at her old school The Waterside Drama and Ballet School.

The school was founded and is still run by Dr and Mrs Bland. With her nose for sniffing out information it isn’t long before Tessa has the run down. It seems that Mrs Bland, a powerhouse of energy and organisation is not quite herself and seems to have some unidentified malady.  Tessa is surprised and pleased to find that one of her former classmates Teeny is teaching there. Although Tessa is quicky admonished for calling her Teeny.  Later while visiting Tina (Teeny), Tessa discovers that Dr Bland is playing away!

The other judges are a broadcaster, Eddie Harper, whom Tessa had met before and who appears to have modelled himself on a Wodehouse character, and his current wife Vera (there are three that go before her, or went before her).   Vera proves to be on the dumpy side with a mournful expression and is a martyr to migraine.  After watching the plays in the competition only one girl really stands out as having massive talent- interestingly the one that is leaving at the end of term.

Later Tessa accidentally learns that the school is currently experiencing a spate of petty pilfering.  Quickly followed by the news that one of the girls is dead.  Suicide is mooted, but Vera is close to hysterics, saying a shadow was there, and she had an intuition, or instinct – call it what you like, sorry but my English is not all that good. Eddie jumped in quickly with.

‘There you are then!’  ‘Better not try, that’s my advice. Slippery customers, these instincts and intuitions. Always creeping up on you uninvited and then leaving you in the lurch when you need them.’

This was a joy to read. Some terrific characters and a tantalising mystery that kept me turning pages. Wonderful dialogue.  I discovered that I have two of these books purchased in the 1970’s. The only mystery is – why didn’t I buy more?  Highly recommended.
------
Reviewer: Lizzie Sirett

Anne Morice, née Felicity Shaw, was born in Kent in 1916. Her mother Muriel Rose was the natural daughter of Rebecca Gould and Charles Morice. Felicity’s older sister Angela became an actress, married actor and theatrical agent Robin Fox, and produced England’s Fox acting dynasty, including her sons Edward and James and grandchildren Laurence, Jack, Emilia and Freddie.
Felicity went to work in the office of the GPO Film Unit. There Felicity met and married documentarian Alexander Shaw. They had three children and lived in various countries.
Felicity wrote two well-received novels in the 1950’s but did not publish again until successfully launching her Tessa Crichton mystery series in 1970, buying a house in Hambleden, near Henley-on-Thames, on the proceeds. Her last novel was published a year after her death at the age of seventy-three on May 18th, 1989.