‘The Scorpion’s Tail by Preston & Child 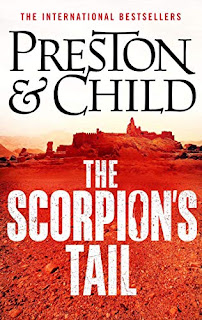 Rookie FBI Special Agent Corrie Swanson is sent to an unusual death: a mummified man half-buried in a ghost mining town in a remote area of New Mexico. She enlists the help of archaeologist Nora Kelly and soon, helped by a Colt-toting local sheriff and Nora’s brother, Skip, they’re caught up in a search for hidden treasure, pursued by other ruthless parties determined to get there first.

The plot is fast-moving, with a lot of interesting history of New Mexico along the way, and the spiky interaction between the two leads is great fun. I also really enjoyed the drawing of the minor characters – I was hopingfor a romance between Corrie and the Sheriff.

The outback setting is beautifully described, and the ending satisfying, with a couple of clever final flips, including of course a walk-on from the mysterious Prendergast.

Douglas Preston was born in Cambridge, Massachusetts, in 1956, and grew up in the suburb of Wellesley. Preston attended Pomona College in Claremont, California, where he studied mathematics, biology, physics, anthropology, chemistry, geology, and astronomy before settling down to English literature. His first job was as an editor at the American Museum of Natural History in New York City. His stint at the museum resulted in his first nonfiction book, Dinosaurs in the Attic, as well as his first novel, Relic, co-authored with Lincoln Child which was made into a movie by Paramount Pictures. Relic was followed by a string of other thrillers co-written with Child, many featuring eccentric FBI agent Aloysius Pendergast. Preston spends his free time riding horses in New Mexico and gunkholing around the Maine coast in an old lobster boat. He counts in his ancestry the poet Emily Dickinson, the newspaperman Horace Greeley, and the infamous murderer and opium addict Amasa Greenough.

Lincoln Child was born in Westport, Connecticut, in 1957. Lincoln graduated from Carleton College in Northfield, Minnesota, majoring in English. He secured a position with St. Martin's, Press where he was associated with the work of many authors, including that of James Herriot and M. M. Kaye. He edited well over a hundred books. Henow writes full-time and is the co-author, with Douglas Preston, of a number of bestselling thrillers including Relic, Riptide and The Ice Limit. He lives with his wife and daughter in Morristown, New Jersey.