‘The Girl on the Platform’ by Bryony Pearce 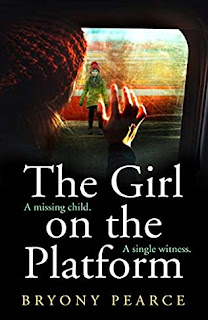 Bridget Carlson is so dreadfully tired. It’s hardly surprising: only a few months ago, after an uncomfortable pregnancy, a prolonged and painful labour culminating in 18 stitches and mastitis, she went back to work because financially it seemed sensible, since she has a better job than her husband Tom and they have a mortgage on their flat they can barely afford on her salary alone and certainly not on his. But she works long hours at a demanding job as Senior Manager in a research agency in Central London with a long commute to the little flat she shares with Tom and baby Grace, and she misses them both so much. Tom is a wonderful father, she has no worries on that score although he’s not high on housekeeping skills, but Grace will only drink breast milk so that, if Bridget cannot feed her herself, she has to express milk so that Tom can feed her. The result of that is that Bridget’s breasts, now accustomed to producing large amounts of milk, are often swollen and painful. And Bridget is not in a fit state to go on a diet to start losing the weight she acquired during pregnancy; physically, she is a mess and looks it. And she’s not sleeping either and has been diagnosed with depression, so often has to take pills, which make her even more tired and often pretty woozy.

One evening, having fought her way onto a District Line train and then through the crowds at St Pancras, she scrambles onto her commuter train and sinks into a seat. She daren’t fall asleep in case she misses her stop, but she is semi-comatose. Then, at one of a number of anonymous stations, as the train rushes through, Bridget sees something which suddenly jerks her wide awake. There is a little girl sitting on a case on the platform outside a shuttered coffee booth. She is all alone. Suddenly, two men descend upon her and haul her into a white van. The train rushes onward and the station and the little girl are gone. Bridget is absolutely certain about what she has seen but no one else in the carriage has seen anything. But she does report it, the train is held up for a long time and Bridget arrives home, distressed and exhausted, but convinced that what she saw was real. And her conviction grows in intensity.

The police arrive at her house and question her; they are sympathetic and gentle but ultimately do not believe her; if this kidnapping, abduction, whatever, really happened, how is it that no young child has been reported missing?

Bridget is more and more convinced that what she saw was real. She uses her professional research ability to research the figures for children who have gone missing and is appalled to discover that numbers of children do disappear each year and many are not accounted for. Some may have been taken abroad by parents, while others are returned home but the authorities are not informed, but there are some for whom the worst must be feared. Could one of these be the child that Bridget saw being abducted? Or is the truth that there was no such child, and was it all in Bridget’s imagination? And if neither of those is true, is there some other reality?

This is a convincing account of post-natal depression, a condition which affects many women who have given birth, and which can vary from ‘baby-blues’ which lasts for a few days to deep depression and even, rarely, to paranoid psychosis, from a writer who herself has been afflicted with the condition.
------
Reviewer: Radmila May

Bryony Pearce  was born in 1976 and has two young children. She completed an English Literature degree at Corpus Christi College Cambridge in 1998 and was a winner of the SCBWI anthology 'Undiscovered Voices' in 2008. She writes Children’s fantasy. The Girl on the Platform is her first mystery.

Radmila May was born in the U.S. but has lived in the U.K. since she was seven apart from seven years in The Hague. She read law at university but did not go into practice. Instead she worked for many years for a firm of law publishers and still does occasional work for them including taking part in a substantial revision and updating of her late husband’s legal practitioners’ work on Criminal Evidence published late 2015. She has also contributed short stories with a distinctly criminal flavour to two of the Oxford Stories anthologies published by Oxpens Press – a third story is to be published shortly in another Oxford Stories anthology – and is now concentrating on her own writing.
Posted by Lizzie at 13:26