‘Murder by Fraud’ by Judith Cutler 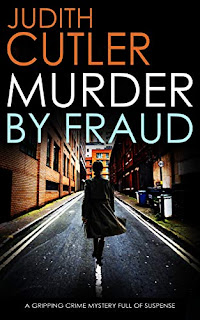 Detective Sergeant Kate Power has settled into life in Birmingham. She gets on well with her superior officer and close colleagues and is on track for promotion thanks to the accelerated promotion scheme. Also, she is sorting out the dilapidated house that her great-aunt gave her, despite the damage by arson that had occurred during a recent major case. Her personal life is still a mess, as she is torn between her affection for two men, both senior officers, one of whom is married.

To Kate’s dismay, she is moved away from her supportive team to the Fraud Squad under the acerbic Detective Inspector Lizzie King, who makes it clear that Kate is too inexperienced in fraud to be of any use. The whole Fraud Squad is desperately overworked and Kate seeks for a role that will not demand too much of her more knowledgeable colleagues’ time in instructing her. One of the jobs Kate takes on is interviewing Mrs Duncton who has turned up at the Fraud Squad offices to complain that Sylvia Barr, her elderly mother, has recently died and has left a will that leaves all of her considerable estate to her handyman, Max Cornfield. Mrs Duncton alleges that Cornfield has forged the will and also implies that Cornfield killed Mrs Barr to gain the inheritance. However, when Kate interviews Mrs Duncton’s brother, who has also been disinherited, he insists that Cornfield deserves the money, as he has looked after his employer without support for years and none of her family has been near her. When Kate meets Max Cornfield, she likes him and finds it hard to believe that he is a callous criminal, but she knows that liking somebody does not mean that they are innocent of all wrong doing. Despite the fact that she finds Max a more admirable person than Mrs Barr’s children, Kate has a feeling that there is something amiss with the will and continues to investigate.

Soon after this, people connected with the case start to die. Kate and her colleagues have to consider whether Sylvia Barr’s will is responsible for the violence, as well as the possibility that, as Mrs Duncton claimed, Mrs Barr had not died a natural death. The investigation takes Kate on a brief trip to Europe in search of the will’s witnesses and on an even darker journey of discovery into the earlier life of Sylvia Barr, her children, Max Cornfield and the cruel secrets of their past.

Murder by Fraud is the fourth book featuring Kate Power, but it works well as a stand-alone. It was first published in 2002 as Will Power. The plot is fascinating, with several clever twists. The descriptions of the stresses of police work are vividly described, as are the difficulties of fitting in with different teams and a variety of senior officers. Kate is an engaging protagonist, intelligent and persistent but also fallible. Murder by Fraud is an engrossing read, which I recommend.
------
Reviewer: Carol Westron