‘Karolina or The Torn Curtain’ by Maryla Szymiczkowa 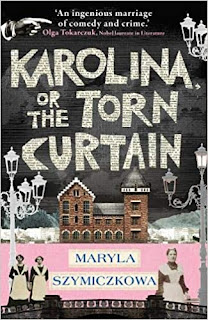 This is the second in this series featuring Mrs Zofia Turbotynska set in late nineteenth century Cracow, now in Poland, but then part of the Austro-Hungarian Empire.

The story begins with the discovery of the body of a young woman in the River Vistula which flows through Cracow. She is Karolina Sculz, until recently a maidservant in the household of Zofia Turbotynska and her husband Ignacy. Zofia had been very fond of Karolina who had been sweet, gentle and very pretty but when Karolina abruptly handed in her notice saying she was about to get married Zofia had been annoyed. But when she discovers that Karolina has been murdered her annoyance turns to grief and she resolves to find out more.

She learns from Franciszka, her cook/head housemaid, that the intended bridegroom had not been the young man she had been walking out with for some time but another young man who had suddenly appeared, telling Karolina that he had emigrated to the US, had done well and then returned to Poland and on meeting Karolina had fallen passionately in love with her (as she certainly had with him) and was going to marry her and take her back to the US to life of happiness and prosperity. But who was he?

Franciszka has discovered a business card with the name of Marceli Bzowski in the room shared by the two girls but it appears that the card was one of a number stolen from its owner. Was whoever stole the card responsible for Karolina’s death?

The official investigation is being conducted not by the investigating magistrate, as would normally be done, then as now, in the Continental system, but by Stanislaw Jednorog, a police commissioner. He politely listens to the two women but when he suggests that Karolina may not have been as virtuous as she appeared, Zofia is indignant: everyone in her household is a model of propriety. Then there is a newspaper report that a young man, a well-known Socialist agitator who had been suspected by the police of involvement in Karolina’s death, has been shot and killed. Is that the explanation for the girl’s death? In that case, thanks not just to the police but to Zofia whose discovery of the card had apparently led the police to the agitator, Karolina can rest in peace and Zofia can take some of the credit for unmasking the murderer.

Or so it seems. But then, over a year later, Franciszka (who had actually seen on at least one occasion Karolina’s new admirer) insists that she has very recently seen the young man who had stolen Karolina’s heart. The search for the truth takes the two women into a very dark web of corruption and sex trafficking with links to some of the most eminent people in Cracow society.

The novel presents a fascinating picture of life in late-nineteenth century Poland. On the one hand there are links to Poland’s existence as an independent (and formerly very powerful) nation such as the wearing of national costume on ceremonial occasions. On the other hand there are adjuncts to modern life such as the introduction of trams and the use of bicycles, although Ignacy’s attempts to cycle are not always successful.

Ignacy and his scientific colleagues discuss the latest scientific developments such as the use of fingerprints to identify criminals but at the same time they express the view to each other in long-winded pompous speeches that any but the most basic education is unsuitable for women, harmful to them physically and intellectually as well as to the nation. And as for the idea that women should have the vote, ‘My dear chap! Ludicrous!’ On the whole Zofia agrees with their views, although she is proud of her recently-discovered detecting abilities. But she is genuinely shocked by the extreme poverty she encounters among the population of Cracow which drives so many women into prostitution and by the hypocritical attitude of the elite males who patronise the city’s numerous brothels. Recommended.
------
Reviewer: Radmila May 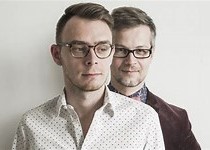 Maryla Szymiczkowa is the pseudonym for Jacek Dehnel and Piotr Tarcynski.

Jacek Dehnel is a writer, poet and translator. He has written several novels, among them Lala (Oneworld, 2018) and Saturn (Dedalus, 2012), and his poetry collection Aperture was published by Zephyr Press in 2018. He writes crime fiction under the pseudonym Maryla Szymiczkowa together with -

Piotr Tarczynski, a translator and historian. They live in Warsaw.

Antonia Lloyd-Jones  is a prize-winning translator of Polish literature. She has translated works by many of Poland’s leading contemporary novelists and authors of reportage, as well as crime fiction, poetry, screenplays, essays, and children's books. She is a mentor for the WCN Emerging Translator Mentorship Programme, and from 2015-17 was co-chair of the Translators Association. Her previous translations of work by Jacek Dehnel include the ovels Lala (Oneworld Publications, 2018) and Saturn (Dedalus Books, 2012).