‘Murder by Arson’ by Judith Cutler 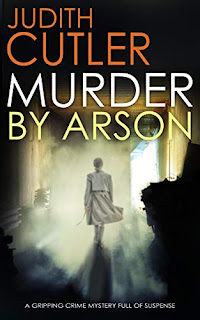 Detective Sergeant Kate Power moved to Birmingham after the death of her police partner and lover in a bungled police raid. The transition has not been easy. Kate’s great-aunt has moved into a nursing home and has given Kate her house, but this remarkably generous gift had its own problems, as the house was in a dilapidated state. After months of hard work, Kate’s professional and domestic life is getting under control but her personal life is still in turmoil. She knows that two men in her life are attracted to her, but they are both senior police officers. Even though Kate is on the accelerated promotion scheme, she dreads her colleagues thinking that she is gaining promotion through sleeping with those who can advance her career, rather than through ability and hard work. Even worse, one of the men who is attracted to her, and with whom she is falling in love, is married and a member of a very strict religious group.

To help regain her fitness after a knee injury, Kate has taken up tennis and she is on her way to work after an early morning practice session, using the back roads to avoid traffic jams, when she encounters a serious accident. A heavily laden lorry has crashed into a cottage, demolishing a large part of it. Fortunately, the elderly couple who own the cottage are unharmed.

Back at work, Kate is investigating three arson cases in separate warehouses. Although the three warehouses seem to have nothing in common, Kate and her colleagues are convinced that the fires are connected and the investigation has ramped up because a woman’s body, presumably a homeless person, has been discovered in the last burnt-out warehouse.

It sometimes seems as though crimes seek out Kate rather than the other way around. Soon after this, she has finished her early morning tennis lesson when she discovers the body of a woman in the changing rooms. Although there is no evidence of foul play, all indications of the woman’s identity have been removed. The death has not occurred in Kate’s police district, but she pushes the first officer on the scene to preserve the area around the death and treat it as a potentially suspicious death. Fortunately, this officer is somebody she has met before, who respects Kate and trusts her instincts, however, his senior officer, Detective Inspector Nigel Crowther, ignores the evidence and insists that the woman died from natural causes. By a mixture of good luck and deduction, Kate manages to identify the victim as Rosemary Parsons, a woman who is active in the local community Despite Kate’s valuable contribution, DI Crowther is still negative and continues to insist that Rosemary’s death was not due to foul play.

The case is taken over by the newly established Major Incident Team and Kate is seconded onto it. Unfortunately, the inspector in charge of day-to-day operations is the obnoxious DI Crowther, who seems to have a particular grudge against Kate. Having failed to force Kate out of the MIT, Crowther insists that she and her new partner, Mark, target the victim’s husband, even though neither of them believe he is guilty. Kate and her colleagues begin to suspect that Rosemary’s death, the arson incidents and even the lorry demolishing the cottage are all connected and are part of a larger conspiracy, but the only way to prove this is to set a trap with Kate risking her life to act as the bait.

Murder by Arson is the third book in the series featuring Kate Power. It was first published in 2000 under the title Power Games. Although a lot of Kate’s backstory is explained in detail in the previous books, this book works well as a stand-alone. The plot is intricate and interesting with several clever twists, and Kate is an engaging protagonist, both strong and vulnerable, and the camaraderie with many of her colleagues is vividly depicted. Murder by Arson is a very enjoyable read, which I recommend.
-------
Reviewer: Carol Westron

Judith Cutler  was born in the Black Country, just outside Birmingham, later moving to the Birmingham suburb of Harborne. Judith started writing while she was at the then Oldbury Grammar School, winning the Critical Quarterly Short Story prize with the second story she wrote. She subsequently read English at university. It was an attack of chickenpox caught from her son that kick-started her writing career. One way of dealing with the itch was to hold a pencil in one hand, a block of paper in the other - and so she wrote her first novel. This eventually appeared in a much-revised version as Coming Alive, published by Severn House. Judith has seven series. The first two featured amateur sleuth Sophie Rivers (10 books) and Detective Sergeant Kate Power (6 Books). Then came Josie Wells, a middle-aged woman with a quick tongue, and a love of good food, there are two books, The Food Detective and The Chinese Takeout. The Lina Townsend books are set in the world of antiques and there are seven books in this series. There are three books featuring Tobias Campion set in the Regency period, and her series featuring Chief Superintendent Fran Harman (6 books), and Jodie Welsh, Rector’s wife and amateur sleuth. Her more recently a series feature a head teacher Jane Cowan (3 books). Judith has also written three standalone’s Staging Death, Scar Tissue, and Death In Elysium. Her new series is set in Victorian times featuring Matthew Rowsley. There are three books in this series.