‘Into Deadly Storms’ by Judi Daykin. 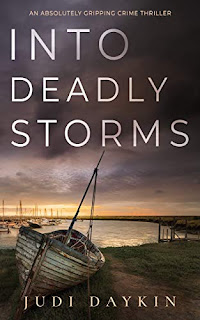 This is the second in the DS Sara Hirst series.  For personal reasons Sara has moved from her post with the Metropolitan Police to the Norfolk Serious Crimes Unit (SCU).  She has settled into a flat in Norwich which she shares with her boyfriend Chris, who runs a nearby coffee shop (providing her with access to a plentiful supply of cakes).  It is the run-up to Christmas, and he is working long hours to cope with demand.

A dog-walker finds the body of Callum Young, who had been a resident in a local children’s care home.  He had been supplying one of his teachers, Sophie, with cocaine and she, becoming worried by his absence from school (and consequent effect on her supply), visits the home.  Here she meets the house father, Matt, and they find evidence that Callum was a member of a County Lines network.  Sophie realises that she must use an alternative supplier, and turns to Gary, who is more of an acquaintance than a boyfriend but has the necessary contacts.

Meanwhile in London, Gary’s sister Lisa, a powerful gang boss, is dealing with some small cogs in her organisation. Johnny, an erring gang member, has been dealing in drugs for his own benefit and to save him from severe retribution, his girlfriend Dannie is forced to act as a courier for the gang.  She is impressed by Lisa and her lifestyle and sees a career opportunity.  She finds that she can keep the needy Gary under control, which proves useful for her aims to establish herself in Lisa’s close circle.

The murder and the investigation of the drugs link means that the SCU and the Drugs Squad have to work together, and tensions emerge both between the units and within the SCU.  Their investigations clear up some (but not all) of the mysteries.  There is some violence, and a fair level of tension is maintained as the various strands intertwine and unwind in an interesting and sometimes unexpected fashion.  The cast list features the bright and the decent, mixed with a good smattering of the unsavoury, the sad, the misguided and the weak.  DS Hirst’s return will please her existing readers and the book will work as a stand-alone for those just discovering her.
------
Reviewer: Jo Hesslewoo
Also, by this author:  Under Violent Skies

Judi Daykin was born in Yorkshire.  She has lived, worked and made theatre in Norfolk for the last forty years. She completed her MA in Creative Writing (Crime Fiction) at the University of East Anglia (UEA), and her debut novel was shortlisted for the Little, Brown UEA writer's prize in 2019. Judi is also a working actor, and also runs her own theatre company, Broad Horizons, specialising in commissioning new plays recovering and retelling women's stories.  She says since Joffe Books offered to publish her novel, she now has the writing bug, who knows how many more there will be.'