‘Bleak Encounter at The Cape’ by Richard Trahair 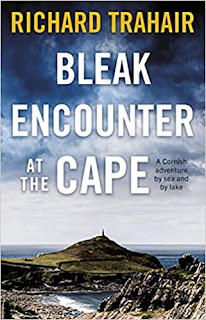 Petroc Tomlyn and his wife Jill live on the Cornish coast at St. Just not far from Lands End. Petroc is a volunteer coastguard and one day after very violent weather, as the seas slowly recede with the tide, he discovers a man's body floating in a tidal seawater swimming pool.

Making his way down over slippery rocks he sees nearby what looks like a body bag. On closer inspection he notes it was made in Switzerland. Lodged nearby is a metal tag which he puts in his rucksack and picks up the bag before it can be washed away. He informs the police and that evening he takes the bag into the local police station, forgetting all about the tag.

It's not until days later that he remembers the metal label and on inspection he deduces some of the letters stand for Lausanne.  When two men visit him saying they are from the Metropolitan Police, he gives them the tag denying he noted anything embossed on it. They seem satisfied and leave.

Having recently fancied a holiday, Petroc and Jill decide to go to Lausanne and satisfy their curiosity as to where the body could have come from. Imagine their surprise when they discover certain letters on the tag stand for a centre for the investigation into infectious diseases.

Unknown to them back in Cornwall, one of the mortuary technicians dealing with the body becomes seriously ill.

We then learn of an embassy in London, bent on threatening a certain state with a virus attack unless they do as requested.

Action now moves between Switzerland, Germany and England. The Tomlyns are unwittingly caught up in the tangle of intrigue, putting themselves in grave danger. What they envisaged to be a relatively quiet holiday turns out to be anything but.

It all leads to a final surprising ending on the West Cornwall coast.

A really absorbing story, especially in the present climate, and it gives food for thought. The author's intimate knowledge of Cornwall shines through every line. His description of the rugged landscape brings the area alive and when he writes about the crashing of the wild seas on the rocks, it's almost possible to taste the salt in the air.

Richard Trahair grew up on the borders of Devon and Cornwall, spending holidays every year at the far end of that peninsula. He has strong farming roots in the area around Cape Cornwall, where his family farmed from c1750 until his enterprising forebears moved on as merchants and manufacturers of foods, notably a baby and toddler rusk that became famous. Richard is a retired chartered surveyor with a BA (Hons) in Textile Management and holder of the Aldhelm Cross from the Bishop of Salisbury. He lives in Salisbury, Wiltshire where he is also the Church organist. This is his second published novel.