‘The Thorn of Truth’ by S.L. Russell 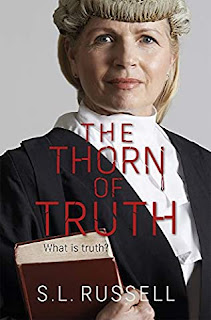 
Anna Milburn is an experienced barrister who believes in applying basic Christian morals to her work. When Calvin Leaman asks if she will defend him against the charge of murdering a young police sergeant, she has a dilemma. Calvin Leaman is generally regarded as a local drugs baron and therefore a source of extensive evil in the local community of Brant, the town where Anna lives and works.  After she has looked at the papers in the case and made a few enquiries of her own, it doesn’t take Anna long to conclude there probably isn’t a case to answer. Not convinced Leaman will get a fair trial because the investigating officer, DCI Bryant, wants Leaman locked up regardless of whether he’s innocent or guilty, and unable to cope with the idea that anyone should be found guilty for a crime they didn’t commit, Anna agrees to acts for Leaman.

Helped by her best friend, Janet, who also happens to be the all-powerful chief clerk at Anna’s chambers, Anna is instrumental in getting the case against Leaman dismissed before it gets to trial. Her actions are all the more courageous because her brother’s son Sam, has been left with a mental age of five after being severely brain-damaged by drugs. Sam’s mother, the local press and DCI Bryant all berate her for defending Leaman.

Whilst all this has been going on, Anna who is divorced and in her mid-forties, makes friends with Rachel, a heart surgeon who is married to plastic surgeon, Michael.  Jasper - Michael’s twenty-year-old son from a former marriage - teams up with Anna’s daughter Millie. Much to Anna’s dismay, Millie also becomes friends with Leaman’s daughter, Tiffany.

The horror in the story is provided by Vince Priddy, an ugly thug, whom Leaman insists is probably the person who killed the police sergeant.  Priddy works for Leaman but holds a grudge against him. When Leaman becomes worried that Priddy may target his wife and daughter, Anna agrees that Tiffany can stay in her house with Millie. Priddy breaks in and takes Tiffany, Millie, Jasper and the dog Gordon hostage…

Although it undoubtedly has its serious side, The Thorn of Truth offers a delightfully easy, and sometimes humourous, read for the holiday season. Anna and Janet convey the daily slog of a barrister’s life with admirable clarity without ever falling into the trap of attempting to over-glamorize it. Anna’s triplet brothers, particularly Alastair, but also Ronnie and Mark plus their elderly parents and Godfather, Geoffrey, anchor the story in the realities of life, whilst her clerk Janet, and her newfound friends Rachel and Michael provide both spiritual guidance and social support. Millie is a likable, but sensibly independent, daughter. All in all, a varied and entertaining collection of individuals to pass the time with.
------
Reviewer Angela Crowther

S L Russell was born in 1951 and educated at Rochester Grammar School and Durham University. For 12 years she taught children with special educational needs and enjoyed it immensely. At around the same time she spent 17 years as a Samaritan volunteer, where she learned a lot. Even as a child she knew she wanted to write. She lives in Kent in the UK with her husband.  Her other love is music.  For more information vizier her web site.

Angela Crowther is a retired scientist.  She has published many scientific papers but, as yet no crime fiction.  In her spare time Angela belongs to a Handbell Ringing group, goes country dancing and enjoys listening to music, particularly the operas of Verdi and Wagner.
Posted by Lizzie at 16:00