Me and My Mysteries by Gitta Edelmann 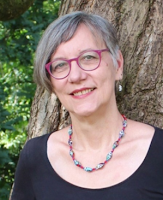 I’ve been a fan of mysteries since I read Agatha Christie’s The Murder on the Links when I was twelve. The year was 1973, I had the chicken pox and could do nothing to spend the time but read. Unfortunately, I did not have many books (my parents even less) and my friends had no books I had not read before. But one of them had a big sister and she was willing to lend me one of her precious Agatha Christie mysteries.

I was spellbound. What a clever idea! How different from the children’s books I had read before! Hooked on crime fiction, I started to read everything I could find on my friend‘s sister‘s shelf or in the public library. Agatha Christie, Edgar Wallace, Dorothy L. Sayers, Georges Simenon, Raymond Chandler – those were the authors that had been translated into German (I only started to read English at the age of 15). There were no German crime writers to speak of at that time as crime fiction was considered to be trivial and formula fiction. Fortunately, this has changed.

Having read hard-boiled, noir, thrillers, forensic crime fiction, parodies and whatever my favourite subgenre still is the whodunnit or cosy crime, as it is called in Germany. By the way – what Germans call Mystery is something completely different: supernatural and horror fiction.

When I was 16 I had a great idea for a mystery involving a choir. I never wrote the book but I always thought that one day... Many many years later (I had written children’s books by then) during a crime fiction weekend I met a publisher. She was looking for historical novels set in the 19th century and mysteries set in Britain. I had a wonderful idea for a historical novel! But in the end the publisher did not like my idea too much and asked me if I could write a mystery instead as I knew Britain quite well and most German authors didn’t.

If a publisher asks you to write something that you have in the back of your head anyway, you just do it. Ella Martin was born, a German romance writer who happens to be involved in crimes while on a research visit to Edinburgh where I had lived for two years...

No, said the publisher. There is another writer setting her novels in Scotland – you have to choose a different location.  So, Ella Martin moved to Canterbury. Which was not too bad because one of my friends lives there and I could stay in Canterbury for my research and meet her at the same time.

I wrote five books in the series taking the liberty to send Ella to Edinburgh and the Isle of Skye in book 5, Canterbury Symphony. At the end of the series Ella’s story was told, any idea for another book would have been far-fetched. Then something brilliant happened. I received an email from an editor of a big publishing company looking for authors for cosy crime series. She had found out about my Canterbury books and we met to get to know each other during another crime fiction conference. She loved my idea of a Scottish series with two lady detectives. 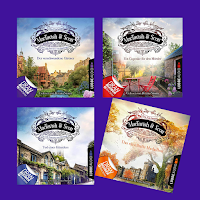 Enter Finola MacTavish (28) and Anne Scott (58). Finola was no stranger to me – I had already met her, i.e. Ella Martin had met her, in Canterbury Symphony.

The first book was published on 1st November 2020 (e-book and audiobook first), three more followed in December, February and April, book five is due in June, after that there will be two books a year. The first three books will be released in print in August.

During the last two years I have written six books of the series (just finished book 6) and I am deeply involved in Finola's and Anne's lives. Writing has become quite easy and fast as I know my protagonists so well that they practically do the work all alone. I only have to find new cases and settings that will be interesting to German readers (a lot of Germans love Scotland): Edinburgh, of course, but also Oban and Aviemore, Glasgow and fictional villages modelled on real ones but adapted to my needs. I have my memories and photos of my research trips. I follow several Scottish photographers on Instagram and Facebook and watch Scottish films or series on Netflix or DVD. I also know people I can ask for details.

But research is still a bit of a problem. I firmly believe that you have to see a place, feel it, smell it and listen to it to get the vibes of the location right. And that if you go there with an open mind you will notice or experience something you would never have thought of before.

So last year I wanted to go to Scotland again, mainly to the Outer Hebrides where I haven’t been before and once again to Inverness and Edinburgh to refresh my memory of the locations. The pandemic put a spoke in my wheel and even now I don’t know when travelling will be possible again. Too bad, I had planned to set a part of book 6 on Lewis and Harris! I had to change the plots and now book 7 (deadline in December 2021) is the Hebrides one and I keep my fingers crossed.

I’ve come a long way from The Murder on the Links to MacTavish & Scott. My teenage dream of writing mystery novels has come true. And I have a wonderful reason to go to my favourite city, Edinburgh, when the pandemic is over: work.

Gitta Edelmann is a German author who writes in any genre she might fancy – but somehow most of her books and short stories end up featuring a crime. After five mysteries set in Canterbury she is now writing a new series set in Scotland: MacTavish & Scott – Die Lady Detectives von Edinburgh. Gitta also is a member of several writers' associations, one of them the Mörderische Schwestern – Murderous Sisters, another Mystery People.