‘When the Stars Go Dark’ by Paula McLain 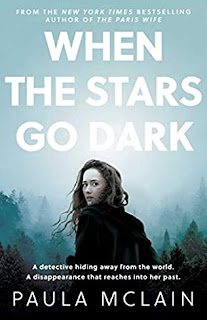 At a time of excruciating personal loss, Anna has sought refuge in the small Californian town of Mendocino - the only place she has ever regarded as home. One of her young children has just died and her husband has told her to stay away until she can work out where her priorities lie: are they with her work or her family? Before her child died, Anna was already carrying a mountain guilt from her childhood. Deserted by her parents before she was eight, she was placed in a series of unsatisfactory foster homes until, aged eleven, she was eventually taken in by a tolerant and loving couple, Eden and Hap Strater. Hap was the lead warden for the Forest rangers around Mendocino. He taught Anna how to follow forest trails and how to survive in the wild; skills that later played great dividends in her search for the missing girl.

Anna lived in Mendocino until she was eighteen, and had happy memories of her friendship with Will Flood and the twins Caleb and Jenny Ford. But she had sad memories as well.  When she was fifteen, the youngsters’ idyl was ruined forever when Jenny Ford disappeared. Her body was found, but nobody was ever charged with her abduction or murder. Jenny’s twin, Caleb, was devastated and never really recovered from her loss. He is now an artist just as his quick-tempered father had been.  Like Will, he is living and working in Mendocino.

Will Flood is now the sheriff in Mendocino. He tells Anna he is hunting for a missing fifteen-year-old, Cameron Curtis, the adopted daughter of a film star, Emily Hague. Cameron has been missing for two days. Anna is a trained missing persons detective and she persuades Will to let her join the search for Cameron.  Anna quickly becomes fixated on finding the teenager, whom she believes has been abused as a child and is now deeply unhappy and trying to unravel her true identity. Appearances suggest that Cameron knew her abductor and probably crept out to meet him of her own volition. As the investigation widens and becomes entwined with searches for two other missing girls, Anna becomes more and more determined to find Cameron- alive if possible.  Cameron’s father and her uncle are suspect, as is virtually everybody else in town.

This is a beautifully narrated, if harrowing story which contains a wealth of other characters, both needy and contributing, besides the ones mentioned here. It bobs backwards and forwards in time, releasing background and personal information gradually when it feels appropriate to do so. The dangers of the local environment – an ocean bordered with high cliffs and vast acres of dense forestry land - are exploited to the full in a book where many of the main characters have huge personal problems.  Depending on how much one has absorbed about those who are preyed upon, and those who prey on others, the end will probably still come as an unwelcome and devastating surprise.  Thankfully, there are glimmers of light at the end of this long and twisty tunnel.

Anna’s and Cameron’s tale is told with enormous authority.  Perhaps this is not surprising as its author, Paula McLain, spent time in foster care. Also, as a survivor of sexual abuse, she understands the terrible legacy bequeathed to children that suffer from its hidden scars. This is a thought-provoking book that will - quite deservedly - stay with you for a very long time. I think it is a book that almost everybody will gain from reading.
-------
Reviewer Angela Crowther.

Paula McLain was born in Fresno, California in 1965. After being abandoned by both parents, she and her two sisters became wards of the California Court System, moving in and out of various foster homes for the next fourteen years. She supported herself by working as a nurses’ aid in a convalescent hospital, a pizza delivery girl, an auto-plant worker, a cocktail waitress--before discovering she could (and very much wanted to) write. She received her MFA in poetry from the University of Michigan in 1996, and is the author of two collections of poetry, a memoir, Like Family: Growing Up in Other People's Houses, and the debut novel, A Ticket to Ride. Her writing has appeared in The New York Times, O: the Oprah Magazine, Good Housekeeping, Real Simple, Huffington Post, the Guardian and elsewhere. When the Starts Go Dark is her first mystery fiction. She lives with her family in Cleveland.

Angela Crowther is a retired scientist.  She has published many scientific papers but, as yet, no crime fiction.  In her spare time Angela belongs to a Handbell Ringing group, goes country dancing and enjoys listening to music, particularly the operas of Verdi and Wagner.
Posted by Lizzie at 13:31