'Death of A Shipbuilder’ by L C Tyler 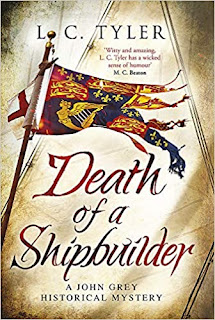 It was with great delight that I received a copy of the sixth book in the John Grey historical mystery series.

The year is 1669 and John Grey, lawyer, is back in Lincoln’s Inn for a week to hand over to his partner Mr Sparks.  A former servant of Oliver Cromwell, Grey had retired to Essex and the estate left to him by his mother. He is now a magistrate and has acquired a knighthood bestowed upon him by his benefactor the spymaster Lord Arlington in lieu of money owed to him, which Grey would have preferred to the knighthood.

Whilst in his chambers he is visited by Thomas Cade, a shipbuilder, who tells Grey he has evidence that Samuel Pepys is taking substantial bribes in his position at the Naval Office. He tells Grey that he has papers and contract letters that could be used in evidence against Pepys and others, and wants Grey to denounce Pepys to the king. Grey sends him on his way, telling him he has little chance against such a powerful man as Pepys.  The following morning Cade's stabbed body is found in the grounds of Lincoln's Inn.

Later that day Grey meets up with Lord Arlington who tells him that he has a small problem and asks him to investigate corruption in the Naval Office. The king he says would like a report in two weeks. It occurs to Grey that by dismissing Cade, he has now lost his best witness and informant. With the evidence that Cade said he had, Grey begins his investigation by questioning the dead man's wife, who says she doesn’t have any papers and who it transpires was having an affair with Pepys... as were a great many other ladies.  Gray then seeks out Pepys who is easy to find living and working at the Naval office in Seething Lane, but he draws a blank.

Grey continues his enquires at the Dockyard interviewing Harry Truscott who is now standing in as master of the dockyard and has nothing but good to say about his recently deceased master. ‘The best I ever had’ he says.

Although a serious story of a murder I so enjoyed the description of life in the ship yard as matters were explained in regard to chips, or what we might describe as offcuts of timber. Some chips being bigger than others, it was decreed that a chip had to be less than 3 foot long to ensure that entire ships were not dragged away to be sold for firewood. In mitigation it has to be said that the wages of people working in the ship yards had not been paid for three years.

While Grey ponders on his next move his wife Aminta appears, ostensibly checking up on the ticket sales of her new play, but there has been dirty work at the crossroads,  and the actors have vamoosed. And meanwhile Grey has been assaulted by a couple of ruffians, who say certain powerful people are inconvenienced by his investigations. Grey suspects they are sent by Lord Dartford. Reporting back to Lord Arlington, Grey is perplexed by his request to ‘ask about Ruby’, And therein lies a tale.  And who did kill Cade and why?

As matters progress it becomes a possibility that Grey will only retain his head if he is fitted for a periwig!

The story is narrated by Sir John Grey in the first person, interspersed by diary entries by Samuel Peyps. The twists and turns of this brilliantly plotted and beautifully crafted story are not to be missed.
Highly recommended
------
Reviewer: Lizzie Sirett 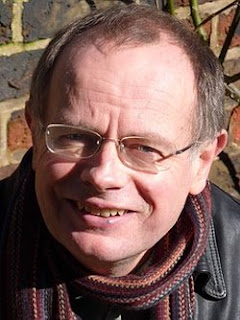 L. C. Tyler was born in Southend, Essex, and educated at Southend High School for Boys, Jesus College Oxford and City University London. After university he joined the Civil Service and worked at the Department of the Environment in London and Hong Kong. He then moved to the British Council, where his postings included Malaysia, Thailand, Sudan and Denmark. Since returning to the UK he has lived in Sussex and London and was Chief Executive of the Royal College of Paediatrics and Child Health for eleven years. He is now a full-time writer. His first novel, The Herring Seller's Apprentice, was published by Macmillan in 2007, followed by A Very Persistent Illusion, Ten Little Herrings, The Herring in the Library, Herring on the Nile, Crooked Herring, Cat among the Herrings and Herring in the Smoke, . The first book in a new historical series, A Cruel Necessity, was published by Constable and Robinson in November 2014. Since then he has published five further books in this series. The latest being Death of a Shipbuilder.

His latest Ethelred and Elsie is The Maltese Herring