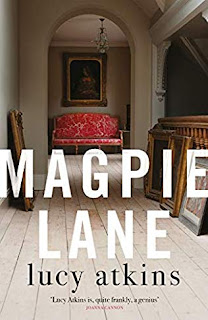 Felicity is eight years old and she has vanished, from under the nose of her stepmother. It gets worse: devastated by grief for her dead mother, Felicity suffers from selective mutism, a phobia-like condition which causes her to freeze in terror when confronted with someone she doesn't know

And as is invariably the case when a child disappears, the first place the police look is her family. In Felicity's case, that family consists of three people: her father Nick, who is Master of an Oxford college, her Danish stepmother Mariah, who has newly given birth and isn't coping well with the upheaval of new motherhood, and her nanny Dee, who is the only person to have paid much attention to Felicity recently.

The police are interviewing Dee, prompting her to cast her mind back over the past few months, in rather more detail than she divulges to the inspector and sergeant. Right from the start she paints a heart-rending picture of a little girl who is completely misunderstood by Nick and Mariah, both of whom are otherwise occupied most of the time, and emotionally absent when they are there.

It's a novel which contains everything a novel should: a setting which provides the ideal background; flawed and vivid characters; narrative tension in abundance. It's all rendered in a style which any aspiring writer would envy, if they noticed it at all, so perfectly in tune is it with the subject matter.

Lucy Atkins clearly knows Oxford like the back of her hand: its foibles and eccentric traditions as well as its narrow byways and ancient, spooky buildings. Her characters, major and minor, don't only leap off the page but also stay firmly lodged in the reader's mind: self-important Nick, self-centred Mariah, Dee with her own history and issues, Linklater the oddball historian; and of course Felicity herself, wound so tight that you feel she might snap at any moment, but also serious, meticulous and very bright indeed.

Dee, the classic unreliable narrator, is the perfect vehicle for the unfolding story. Her keen jaundiced eye throws light into far more dark corners than a more sympathetic one would – and dark corners abound in the house of secrets and lies she is forced to inhabit. The narrative tugs the heartstrings and grips the emotions as it moves inexorably to a conclusion which is both surprising and inevitable, like all the best mysteries. And Magpie Lane is up there with the best.

Some novels entertain for a few hours, but soon slip off the edge of a busy mind. Others stay around for a long time, haunting the reader's memory and imagination. Magpie Lane falls firmly into the second category
-------
Reviewer: Lynne Patrick

Lucy Atkins is the author of three acclaimed novels: The Night Visitor (May 2017), The Missing One (2014) and The Other Child (2015), published by Quercus. She has also written, co-written or ghost-written seven non-fiction books including the Amazon #1 parenting title, First Time Parent (Collins). Lucy is a book critic for The Sunday Times and regularly appears on BBC radio Oxford's Book Club. She was a feature journalist for many years for UK newspapers including The Guardian, The Telegraph, The Times, The Sunday Express and magazines such as Red, Woman & Home, Psychologies and Grazia. Lucy lives with her family in Oxford, UK. Follow Lucy on Twitter @lucyatkins