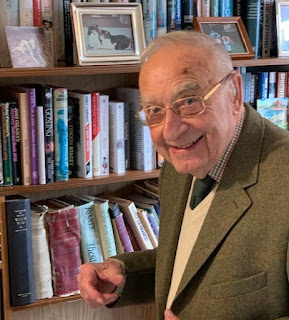 PL:   Like 1974? That’s more than half my lifetime, and I’m no spring chicken.
GO:  But I didn’t have a Plot. I was waiting for the right idea to come along. This is a murder mystery. My early ones were thrillers – spy stories.

PL:  The murder mystery is the one you always wanted to write?

GO: Almost as long as I can remember. When I was ten, I was evacuated to my grandparents’ farm in North Wales. One day I walked down to Criccieth where, at the back of the newsagent’s, was a private library. For a

penny, I borrowed a book. I can’t remember the title or the author, but it was about a reporter who solved crimes quicker than the police. ‘That’s a good job,’ I thought. I mean a career in journalism, not beating the cops at their own game. About that time, I also became a great fan of The Saint and The Toff, never dreaming that years later I would meet their creators, Leslie Charteris and John Creasey.

PL: So, the seeds were sown for a career in newspapers and for your crime books. What was the appeal of spy novels? You’re not going to tell me you worked for the secret service?

PL:  You told me once you were in Germany during the cold war.

GO:  That was National Service. I was the gunner of a Centurion tank in the Royal Scots Greys

PL:  I know you used that experience in your writing because when the books were reissued recently, two of the covers featured tanks. You wrote six in six years, didn’t you, starting with The Power Bug in 1968? And I’ve seen some lovely comments online, like, ‘I was stunned that a series this good, with six exciting adventures, eluded my attention for so many years.’

GO:  Where did you find that?

PL:  At a site called Spy Guys and Gals. He has a lot more to say, but I’ll spare your blushes.

PL:  Like ‘They are so good and enjoyable and so easy to read that I am pleased as heck to have found them and to have read them and to be able to tell others about them.’ Yet you wrote them quickly.
GO: In bursts. I could manage two in a year.

PL:  You had your career as a journalist, so I suppose that was a good grounding. How did you start out with that?

GO:  After demob came the harsh reality that it wasn’t easy to break into journalism. Editors would ask why they should pay to train a 20-year-old when they could get a 16-year-old school leaver. Eventually, I lied about my shorthand and typing speeds and was taken on as a reporter on the Shields Gazette, the oldest evening paper in England.

PL:  Did you get found out?

GO:  Of course. The editor sent me to shorthand classes. I covered everything from flower shows to miners’ strikes. Court cases. Council Meetings. Shipyard accidents. Then I moved indoors as a sub-editor and later became the chief sub. It was a great paper to work on, but Fleet Street was always the aim.

GO: The Daily Telegraph offered me a job on the home news desk. That was where I first met H.R.F.Keating – Harry. He was a sub on the foreign desk. It was 1959, before either of us joined the Crime Writers’ Association. I also did Saturday shifts on The Sunday Telegraph – even on the dummy run, two weeks prior to its launch.

PL:  Exciting times.
GO:  Yes, but the lure of Fleet Street palled. I used to leave home at Orpington at about 3.30 p.m. and was seldom back before 2.30 a.m. Not ideal for family life. I guessed I would see little of my daughter, who was about to start school. I needed a day job, so in 1963 I resigned and joined the Evening Post in Bristol as features editor. After four years, I switched to my first love, news, to spend many happy years as the chief sub-editor . .with my evenings free.

PL: Free to write a novel?

GO: I thought about that murder mystery. But there was a snag. I couldn’t come up with an original plot. So, in 1967, I wrote The Power Bug instead.

GO:  Right. I started at the top and sent it to Collins. They sent it back. I’d noticed lots of Robert Hale books in my local library and I knew they published James Hadley Chase (of No Orchids for Miss Blandish fame), who went to my old school, so I sent it to them and – hooray! –   they accepted it. Oh, the thrill! Nine months later I was a published author. And things happened. My wife Dorothy and I were invited to a literary lunch in Bath and I was amazed to see copies of my book displayed beside books by the main speakers, Godfrey Winn and R.F.Delderfield. They chatted to us after the lunch and I can still recall Winn’s advice: ‘Don’t give up the day job and starve in a garret. Remember you have a family to feed.’

PL:  So, you wrote the next one soon after.

GO:  Balance of Fear. It took six months, three to think and three to write. My working method was set. Before putting pen to paper, I liked to know, roughly, the beginning, the middle and the end of the story. That way I wouldn’t get lost.

GO:  I’m sure you did the same. Between six and midnight most evenings I scribbled, crossed out and scribbled some more on small sheets of rough copy paper. While I was at work next day, Dorothy would somehow decipher my untidy scrawl and type it out neatly.

PL:  It was just like that in the Lovesey household. Jax typed my stories on an old Olympia portable. This was when – 1968?

GO:  The year I joined the Crime Writers’ Association. With two books to my name, I went to my first meeting in London and was greeted by the chairman, Herbert Harris, who was in the Guinness Book of Records as the world’s most prolific short story writer; and by John Creasey, the founder of the CWA, the author of more than 500 novels.

PL:  A bit daunting.
GO:  And when Creasey asked me what I’d been up to, I told him proudly that I’d just written two crime novels in a year. What a ridiculous thing to say to a man who could write one in a week! His eyes twinkled behind his black-framed glasses. I think he was trying not to laugh, but he said, ‘Jolly Good and Good luck.’

PL: Were you inspired to write more?

GO:  Certainly, but I still couldn’t find the blast of inspiration for a detective story, so I was back to my old pals, Dingle and Jones. Traitor’s Gait, Checkmate for China, Death’s No Antidote and A Time for Vengeance were all published first by Hale.

PL:  And I know you had success with short stories.

GO:  Two got into John Creasey’s Mystery Bedside Book, the CWA anthology. And I found markets in the London Evening News, Reveille, Australia Women’s Weekly and magazines in Norway, Yugoslavia and the Netherlands. But my biggest thrill came when the Saint Magazine was revived in America. Three Brits had stories in the first issue: Harry Keating, Christianna Brand and me. A special lunch was put on for us at the Inn on the Park. And Leslie Charteris, the creator of The Saint, would be there as consultant.

PL:  I met her myself a few years later, when Leslie was presented with the CWA Diamond Dagger. I was chairman that year, so I did the honours. Audrey was charming. She once played opposite John Wayne in a western. But now I want to ask you about the new book.
GO: The idea came to me a long time ago, in the early eighties, before the Saint Magazine lunch. My good friend Clive Lewis, a chief inspector in the Kent Police, was seconded as a lecturer for three years to Bramshill, the world-famous police staff college in Hampshire. Clive, who retired as a chief superintendent, sadly died six years ago. He was married to my wife Dorothy’s cousin, Adrienne. He invited the three of us for a weekend at the college while the students were away.

PL: What an opportunity!

GO:  It was. He met us in the hall of the large Jacobean mansion that dominated the campus and housed the administration offices. In one corner of the hall was a large old chest, its lid open. I darted over to look inside. It was just the right size for a body, and I said so. And Bingo! I had a plot: murder in the closed environment of a police college where all the suspects are either senior police officers or connected to the police.

PL: I’m sure that plot-line must be a first.
GO: I hope so. Clive told us stories of the chest, that had, indeed, housed a body, and of the ghosts that made Bramshill ‘the most haunted house in Hampshire.’ I knew the college ran junior, intermediate, and senior command courses called Syndicates. Clive led Syndicate Six. A title sprang to mind, and The Syndicate Six Murder was conceived. During its long gestation, the plot changed many times. Then in 2015, just as I began to write, the college closed, so I set the story in Bramshill’s final days.

PL:  And it was snapped up by Joffe Books. As you say, it was a long gestation, almost forty years. But I’ve read it in manuscript, and it was well worth waiting for. 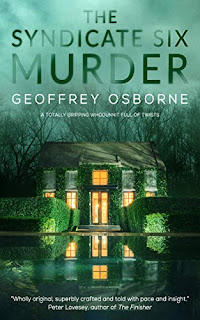 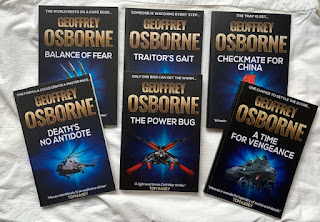 The Power Bug, Balance of Fear, Traitor’s Gait, Checkmate for China, Death’s No Antidote and A Time for Vengeance are published in paperback and as e-books by Lume Books (Endeavour Media).

Peter Lovesey was born in 1936, and attended Hampton Grammar School before going to Reading University to study fine art. He soon switched to English. National Service followed before Peter qualified as a teacher. Having already published The Kings of Distance, named Sports Book of the Year by World Sports, in 1969 he saw a competition offering £1,000 for a first crime novel and decided to enter. Wobble to Death won and in 1975 Peter became a full-time crime writer, winning awards including the Cartier Diamond Dagger in 2000 in recognition of his career in crime writing. He is most well-known for his Inspector Peter Diamond series. There are 17 books in the series. His most recent book is The Finisher.  Click on the title to read the review.