‘Death and the Singing Birds’ by Amy Myers 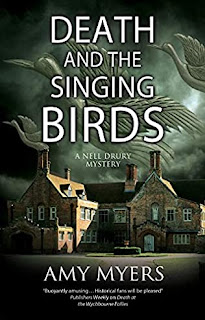 It’s 1926, the year of the General Strike. In rural Kent, however, Lord and Lady Ansley have other things to worry about: the arrival of new neighbours, Sir Gilbert and Lady Saddler, and their artist friends. They are not just any artists, but a largely French group dedicated to non-representative ideals. They celebrate their work – and the promise of an exhibition sponsored by their leader, Sir Gilbert – with a festival to which the whole village will be invited.

The event is marred by the death of Lady Saddler – her body is found dumped in a garden of miraculous automata. Lord Ansley’s valet, a man whose PTSD means he has not yet escaped the trauma of the War, inexplicably confesses, and is promptly arrested. The question of Mr Biggs’ guilt divides the Ansley household, but one employee is determined to prove him innocent: chef Nell Drury, who has a Scotland Yard gentleman admirer, is immediately called to the rescue. Although Nell and DCI Alex Melbray love each other, their separate investigations threaten to sever their relationship forever.

Myers juggles a large and deftly-drawn cast, digging into the history of the later stages of the War as well as rural prejudice against the unknown.  Her interesting heroine – she’s the daughter of a coster-monger who owns and drives her own car – has only one fault as far as I can see: a habit of inventing her own culinary imprecations.

Fans of Amy Myers know they can trust her to produce civilised, engaging novels: this one will not let them down.
Strongly recommended.
------
Reviewer: Judith Cutler 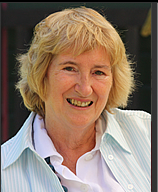 Amy Myers worked as a director in a London publishing firm, before realising her dream to become a writer. Her first series featured detective, August Didier, a half French, half English master chef in late Victorian and Edwardian times. She writes a series with her American husband James Myers, featuring Jack Colby, car detective, there are 5 books in the series. Her most recent series is set post WW1 and the first book in the series is Dancing With Death, published January 2017. Death and the Singing Birds is the third in the series. Amy also writes historical novels and suspense under the name Harriet Hudson.

Judith Cutler  was born in the Black Country, just outside Birmingham, later moving to the Birmingham suburb of Harborne. Judith started writing while she was at the then Oldbury Grammar School, winning the Critical Quarterly Short Story prize with the second story she wrote. She subsequently read English at university. It was an attack of chickenpox caught from her son that kick-started her writing career. One way of dealing with the itch was to hold a pencil in one hand, a block of paper in the other - and so she wrote her first novel. This eventually appeared in a much-revised version as Coming Alive, published by Severn House. Judith has seven series. The first two featured amateur sleuth Sophie Rivers (10 books) and Detective Sergeant Kate Power (6 Books). Then came Josie Wells, a middle-aged woman with a quick tongue, and a love of good food, there are two books, The Food Detective and The Chinese Takeout. The Lina Townsend books are set in the world of antiques and there are seven books in this series. There are three books featuring Tobias Campion set in the Regency period, and her series featuring Chief Superintendent Fran Harman (6 books), and Jodie Welsh, Rector’s wife and amateur sleuth. Her more recently a series feature a head teacher Jane Cowan (3 books). Judith has also written three standalone’s Staging Death, Scar Tissue, and Death In Elysium. Her new series is set in Victorian times featuring Matthew Rowsley. The second book in this series will be published on 31st December 2020.