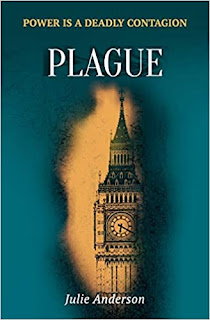 Not the Covid 19 pandemic of 2020 which as I write has paralysed the world for the best part of a year, but the earlier outbreak of bubonic plague in 1665 which brought death to many of the inhabitants of London and elsewhere. The thousands who died were hastily interred in deep pits; from time to time the constant rebuilding which is a feature of London uncovers a ‘plague pit’ and gives rise to a great deal of publicity.

Cassie Fortune, the protagonist of this story, had previously spent 11 years at GCHQ, making connections, detecting crimes and identifying betrayals, a job which had brought her access, knowledge and power, a job she had loved. Then she had lost that job and now spends her time overseeing minor procurement projects. It is in that capacity that she is called out, in place of her boss, Duncan MacFarlane who is attached to the Deputy Prime Minister’s Office, to ascertain why there has been yet another delay in the long overdue London Crossrail Project, this time in the neighbourhood of Bond Street. It is not until Cassie is deep underground that she sees, among a welter of ancient bones, the body of a young man. He has clearly been murdered – his throat has been cut – and she quickly identifies by a tattoo on his arm that he is Polish and equally quickly manages to avert panic among the largely Polish workforce at the word ‘plague’. But she cannot avert the overwhelming media fascination at the connection between a suspicious death and the very idea of plague. But this is not the only dead body to be found in an ancient plague pit, another one is found, Spanish, male. Both bodies bear signs of physical and sexual abuse. But the second body is found with a pass to the Palace of Westminster (ie. the House of Lords and the House of Commons). And the pass is in Cassie’s name. This immediately arouses the suspicions of the police in the shape of Inspector Andrew Rowlands; Cassie recognises the victim as one of a number of workmen who had been replacing tiles in the Central Lobby of the House of Commons. And then Cassie is asked by the Deputy Prime Minister to look into these deaths to make sure that no connection to Government personages exists – she is told that the current Prime Minister will be stepping down in a few days and his probable successor must be ensured to be above any possible breath of scandal. Cassie has only seven days to come up with the answers the DPM wants; if she succeeds, she will be on her way to retrieving her former status; if she fails she will be in a worse position than she was before. She accepts the challenge and soon finds herself investigating corruption and sexual deviancy in the highest political quarters. What has led her is the discovery of another victim of sexual and physical abuse, this time a young French-Algerian woman, but so traumatised that she is barely able to gasp out the details of what happened to her, not just by one man but several. And the police are able to track how the woman made her escape along the maze of ancient waterways and Victotian sewers that underlie the buildings – the Houses of Parliament, the Supreme Court, Westminster Abbey – that epitomise and are the heart of British democracy – and lead to the very heart of the British establishment.

I was privileged to watch a podcast provided by the publishers of this fascinating book and by the Museum of London entitled The Secret Rivers of London which described the many rivers which underlie modern London, the most famous of which is the Fleet River. Another such river was the Tyburn brook which ran down from Hampstead to where Parliament now stands but which was then a marsh with an island in the middle – Thorney Island – on which the great buildings were constructed. At first the Tyburn brook, like all of London’s rivers, supplied the city’s inhabitants with drinking water but by the 19th century they had all become spectacularly polluted and after the Great Stink of 1858 the Victorian reformer Bazalgette incorporated them all into London’s present-day sewage system, incorporating not only the ancient rivers but even, for instance, the remains of some Roman constructions. It is the Tyburn brook which hides the secrets that Cassie must uncover. The podcast was both fascinating and informative and I wish I could have included more from it; however, more information can be obtained from the Museum of London.
Recommended.
------
Reviewer: Radmila May 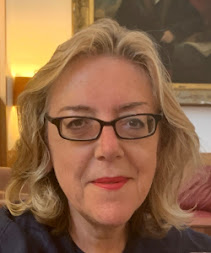 Julie Anderson was born in Worcestershire, and now lives in Clapham, south London. Julie is a co-founder of Clapham Writers the charitable organisation responsible for the Clapham Book Festival, an annual celebration of books and writing in South London. She curates literary events across London, such as at the Lambeth Country Show and Storytelling at the Crystal Palace Overground Festival. Julie also writes, as J.J.Anderson, for younger readers in the two Al Andalus books, 'Reconquista' and 'The Silver Rings'. Her Current novel Plague is published by Claret Press.  The second, Oracle, is scheduled for publication in March 2021 and the third, set in London is Opera, in 2022.

Radmila May was born in the U.S. but has lived in the U.K. since she was seven apart from seven years in The Hague. She read law at university but did not go into practice. Instead she worked for many years for a firm of law publishers and still does occasional work for them including taking part in a substantial revision and updating of her late husband’s legal practitioners’ work on Criminal Evidence published late 2015. She has also contributed short stories with a distinctly criminal flavour to two of the Oxford Stories anthologies published by Oxpens Press – a third story is to be published shortly in another Oxford Stories anthology – and is now concentrating on her own writing.
Posted by Lizzie at 09:23