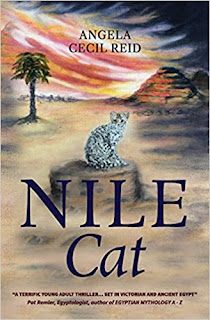 In 1871 twin sisters Rose and Lily Sinclair with their parents are sailing to Egypt, Lily’s father works in the Egyptology Department of the British Museum. The purpose of the visit to Egypt is threefold: Lily has weak lungs and her parents feel she would be better away from the heavily polluted winter atmosphere of London; Mr Sinclair’s brother Arthur, a noted Egyptologist, had died several months ago and Rose and Lily’s parents are going out to Egypt to support his widow, Aunt Dora, and to assist in winding up his affairs; and they are all also going to visit Rose and Lily’s brother Max who is taking part in the excavation of a site near Alexandria. Both girls, for different reasons, are looking forward to arriving in Egypt, but there is something that is making Rose deeply uneasy. There is another passenger on board, a Mr Baxter, who follows them constantly; he is fascinated, he tells Rose, by their likeness and their flame-red hair and pale complexions. Rose senses, without being able to think of a reason why, that he wishes her harm. Nor is that Rose’s only problem: another passenger, fluffy, fluttery Mrs Hodges has a confession to make to Rose and a favour to ask: she and her young daughter Lottie had visited Uncle Arthur on his excavation and while there Lottie had stolen an object from Uncle Arthur’s Cabinet of Curiosities – a tiny statuette of an Egyptian cat. Mrs Hodges, having deposited Lottie in a boarding school, is now on her way to India to join her husband so could Rose return the cat to the Cabinet of Curiosities? And could Rose promise not to tell a soul, otherwise Lottie could get into dreadful trouble? Against her better judgement Rose agrees.

When the family gets to Egypt, they receive news that Max has been injured in an accident on site; the parents depart immediately for Alexandria while the girls are to stay with their Aunt Dora. Somewhat officiously Mrs Hodges insists on accompanying them. Rose knows that this would be the perfect opportunity to slip the cat statuette back into the Cabinet of Curiosities but she is entranced by the cat and would like to keep it with her for a bit longer. It is when she is sleeping with the cat in her hand that she dreams and her dreams are of Egypt 3000 years ago when the Egyptian Empire was in its prime and Ramesses II was on the throne. Pyramids were being built and all Egyptians worshipped the Egyptian gods. Isis, Osiris, Horus, and many others. Certain animals were held in high regard; among the highest were cats who were deemed to have magical powers. One such is Miut, the cat in the temple of Osiris, the chief god, whose priest is the High Priest. But the last High Priest has just died and there is rivalry as to who will be the next High Priest. One candidate is Khay and it is his son, Hori, who has charge of the temple cat. She is held in such reverence that people call her Little Goddess, but wisely the author does not anthropomorphize her: she is just a cat, whose priorities are food, having a good sleep, and right now finding a safe place to deliver her litter of kittens, although she does also have a mean set of claws to defend herself with if required. And she is going to need them, because there are rivals for the High Priesthood and for those rivals the continued existence of the cat is a threat. And not only Hori is aware of the danger, Rose in her dreams also sees what is going on but she can only watch, she cannot intervene.

Meanwhile, back in the 19th century, there are other dangers. Mr Baxter turns up at Aunt Dora’s house, very anxious to help her sort her late husband’s papers and when Rose discovers that he has been married twice before and both wives have died she becomes very worried for her aunt’s safety. And there is a photograph of Mrs Hodges and Mr Baxter together so do they know each other? And someone else, a man in a cream suit, seems also to be following Rose.

For any Mystery People reader looking for a last-minute present for someone in the Young Adult readership age range, this story would be ideal. It is thrilling and mysterious and the clever blending into the story of the author’s considerable knowledge of life and religious belief in Ancient Egypt makes for a fascinating read. The two girls are charming characters: being well-brought Victorian young ladies there is no ‘teenagerishness’; they do bicker but not excessively and their essential fondness for each other is clear. Rose does sometimes feel resentful that her father is stricter with her than with Lily, but she does accept that he is motivated by concerns for Lily’s health. Mr Baxter is suitably creepy while in the Egyptian part of the story the youths and malevolent priests who threaten Miut and Hori are highly menacing.

Nor would the readership be confined to the 12-18 age range; Wikipedia tells us that approximately 50% of the readership of YA novels is adult. Reading Nile Cat, I remembered how much I used to enjoy the Amelia Peabody novels of the late, great Elizabeth Peters, herself a distinguished Egyptologist who made Egyptology both informative and highly entertaining. I enjoyed Nile Cat just as much as I did the Peabody novels and I believe that readers right across the age spectrum will also enjoy it. Very much recommended.
--------
Reviewer: Radmila May 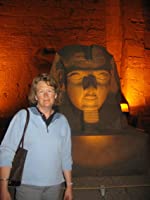 Angela Cecil Reid has been entranced by Egyptology since childhood. Hardly surprising since her great-great-great grandfather, Admiral Robert Mitford, visited Egypt in 1811 and fell passionately in love, Angela says, with all things Egyptian. This passion was passed on to his descendants, the Tyssen-Amhersts who sponsored various excavations, and in particular to Angela’s great grandmother who ran her own excavations at Aswan. It was this enthusiasm which provided the inspiration for Nile Cat, which is the first in a planned trilogy. Angela had always written but what with first teaching children with dyslexia in Oxford and also running a smallholding near Wallingford in Oxfordshire where she breeds rare breeds sheep, and keeps hens, it was not until her own children had left home that she began to write seriously. She now has a number of projects planned including accounts of some of her archaeologist ancestors.

Radmila May was born in the U.S. but has lived in the U.K. since she was seven apart from seven years in The Hague. She read law at university but did not go into practice. Instead she worked for many years for a firm of law publishers and still does occasional work for them including taking part in a substantial revision and updating of her late husband’s legal practitioners’ work on Criminal Evidence published late 2015. She has also contributed short stories with a distinctly criminal flavour to two of the Oxford Stories anthologies published by Oxpens Press – a third story is to be published shortly in another Oxford Stories anthology – and is now concentrating on her own writing.
Posted by Lizzie at 15:29