‘How to Disappear’ by Gillian McAllister 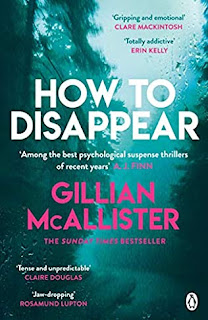 I have to say at the outset that this is one of the most gripping books I have ever read. I picked it up from what may seem a most unlikely source – the website of the Romantic Novelists Association. True, it was recommended by the administrator of the Romantic Suspense Chapter, Sue Fortin, and it was on the basis of that recommendation that I bought and read the Kindle edition. Romantic suspense can be said to be the crossing point between true crime fiction and romantic fiction which most crime fiction readers (especially male) disregard totally. This title is, however, an excellent example of that crossing-point.

Zara, aged 14, lives with her mother, Lauren, and her stepfather Aidan in Islington (her own father is long gone).  She is a lovely girl, kind, thoughtful, bookish, and environmentally aware. She wants so much to help others and one way in which she does that is to assist in a hostel for homeless men. One evening on her way home across a local park she sees one of those men, one she knows, being savagely attacked by two youths in football shirts. By the time she intervenes, the youths have gone and the homeless man dies in her arms. Zara knows what she must do; inform the police and be prepared, if the youths are identified, to give evidence at their trial. They are identified as being members of a local (fictitious) football team and are arrested and one of them is remanded in custody. By the time the trial takes place a year has elapsed but Zara who is totally committed to doing what she believes to be right is still the only witness. Encouraged by her mother and by the police she will give evidence, not as Zara but for legal reasons as Girl A and from behind screens. But Zara has a highly anxious temperament, exacerbated by the formidable atmosphere of a criminal trial, and under pressure from counsel for one of the defendants, she admits that, despite having given evidence for the prosecution in the initial stages of the trial, she is not all that certain that it was the defendants who had attacked the homeless man, maybe he had started the confrontation and they had been acting in self-defence. Eventually she does admit that that is what she actually saw, and therefore she had not only lied to the police but to the court. The trial is immediately aborted, and the defendants are freed. Nor is that the end of the affair; in present-day Britain, where football is more or less the national religion and footballers are regarded as young gods, the media has a field day and the usual array of on-line trolls etc all too soon identify Zara as Girl A. Worse is to come; Zara is threatened with assault, rape, death. And then, even worse, there is an attempt to abduct Zara, unsuccessful this time, but what if there is another?

The police and the Crown Prosecution Service decide that for her own safety Zara must go into witness protection. But, because she is so young, her mother must go too. They must change identities, live somewhere else, become different people altogether, breaking all contact with people from their present lives. Lauren and Zara find that coping with the isolation of their new lives and the ever-present fear of discovery is almost unbearable.

What about Aidan? He loves Lauren and Zara deeply and cannot bear the thought of being apart from them. But he has his own daughter, Poppy, by an earlier marriage. He loves Poppy just as much as he loves Lauren and Zara; can he bear to part from her forever? Maybe she too could go into exile? No, not possible, because Poppy’s mother Nathalie has recently developed multiple sclerosis and wants Poppy to stay with her. A terrible choice for Aidan, made worse because if he stays in London with his daughter he cannot tell her the truth. But he decides he must stay and support her.

Is there nothing else he can do? Yes, there is. Rashly he decides that he will infiltrate the gang responsible for the murder of the homeless man. If he can find sufficient evidence to lead to their conviction without the need to implicate Zara then surely she and Lauren will be safe and can return. So, Aidan too adopts a false identity and begins the process of infiltration through which he begins to learn that there was more to the homeless man’s murder than a simple brawl.

Poppy too is becoming involved but without her father’s knowledge; not believing Aidan’s story that he and Lauren had split, she and her friend Emily are searching social media for the truth about her stepmother’s and stepsister’s disappearance. These separate games that Aidan and Poppy are playing are dangerous for all three; one false step and the consequences for any of them, or indeed all three, could be terrible.

I was completely hooked by this story until the very end. It is dramatic and tense and the main characters are sympathetic and appealing. The narrative structure is simple and effective; the author’s legal knowledge is convincing. I am surprised to see that she seems to be unknown in crime fiction circles; at least she does not appear to be a member of the Crime Writers’ Association nor to be among the authors listed on the Crime Readers’ Association website. I shall certainly look out for her other titles. Highly recommended.
------
Reviewer: Radmila May

Gillian McAllister graduated with an English degree in 2006 and is now a lawyer with a large law firm. Her blog has been featured in various publications including Company magazine. She lives in Birmingham with her boyfriend and cat.

Radmila May  was born in the U.S. but has lived in the U.K. since she was seven apart from seven years in The Hague. She read law at university but did not go into practice. Instead she worked for many years for a firm of law publishers and still does occasional work for them including taking part in a substantial revision and updating of her late husband’s legal practitioners’ work on Criminal Evidence published late 2015. She has also contributed short stories with a distinctly criminal flavour to two of the Oxford Stories anthologies published by Oxpens Press – a third story is to be published shortly in another Oxford Stories anthology – and is now concentrating on her own writing.
Posted by Lizzie at 15:01