‘The House of the Hanged Woman’ by Kate Ellis 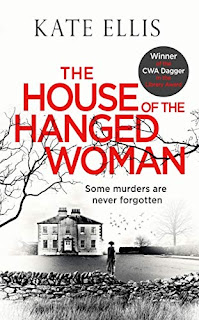 It’s November 1921, when the Member of Parliament for Liverpool East travelled to Derbyshire to stay with a colleague, went for a walk and disappeared. The local police have made no progress in finding him and the Prime Minister wants him found. And so Detective Inspector Albert Lincoln of Scotland Yard is instructed by his superintendent to go to the Village of Wenfield and locate him.  You are the perfect man for the job says his superior, you know the area since you successfully investigated a series of murders there in 1919.

For Albert, Wenfield is the last place he wants to be. Albert’s memories of his time there two years ago are not ones he wishes to dwell on. Albert’s wife Mary who has never recovered from the death from influenza of their young son, is now in a sanatorium. She has shut her husband out of her life, and regrettably fallen under the influence of a preacher who claims to be able to contact her dead son.

Even as he prepares to journey north Albert receives news from Sergeant Teague in Wenfield that a body has been found near an ancient stone circle called the Devil's Dancers, naked and with his face bashed in. Could this be the missing politician?

However, as Albert investigates the matter turns out to be far more complex than was at first thought. Since his last visit the kindly Vicar, the Reverend Horace Bell has died and the new Vicar, the Reverend Fellows has moved into the vicarage. The late Vicar’s wife Caroline tells Albert that she thinks her husband was murdered. But why?  Albert tells her with the Coroner having delivered a verdict of death from natural courses he has no jurisdiction to open this case, but he does visit the new Doctor Kelly now living in what the locals have dubbed The House of the Hanged Woman, to see what he has to say.

Then a local man is killed.  Sergeant Teague is quick to make an arrest, but Albert is not convinced that Teague has arrested the right person.

The main story is related by Albert Lincoln in the third person but interspersed with the first-person narrative of Rose Pretting. She is a young unhappy woman who spends a lot of time reading and fantasises of a different life.

There are three mysteries in the village, only one for which Albert had been sent from Scotland Yard to solve, but as the book progresses the threads of these different situations begin to overlap in places, and Albert is drawn in to all three.

Cleverly and intricately plotted this is a page turner. Red herrings and twists abound. No one is who you think they are, well except for Sergeant Teague who is definitely what I think he is.  At the end is a surprising twist that I did not expect. Highly recommended.
------
Reviewer: Lizzie Sirett
There is reference in the book to Albert’s first visit to Wenfield.  Here is a link to a review of
A High Mortality of Doves. 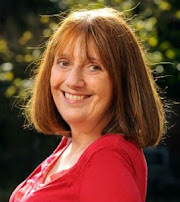 Kate Ellis was born in Liverpool and she studied drama in Manchester. She worked in teaching, marketing and accountancy before first enjoying writing success as a winner of the North-West Playwrights competition. Crime and mystery stories have always fascinated her, as have medieval history and archaeology which she likes to incorporate in her books. She is married with two grown up sons and she lives in North Cheshire, England, with her husband. Kate's novels feature archaeology graduate Detective Sergeant Wesley Peterson who fights crime in South Devon.  Each story combines an intriguing contemporary murder mystery with a parallel historical case. She has also written five books in the spooky Joe Plantagenet series set up in North Yorkshire as well as many short stories for crime fiction anthologies and magazines. Kate was elected a member of The Detection Club in 2014. She is a member of the Crime Writers Association, Murder Squad, and Mystery People. Her most recent series is set post WW1.  The third and latest book in this series is The House of the Hanged Woman.