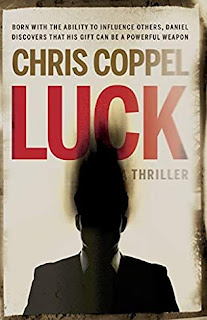 Mary Trapp and her husband Henry have been married for nearly fifteen years and have never wanted children.  Then, for some inexplicable reason, Mary’s seven-months-pregnant sister and her husband commit suicide by deliberately sitting in their car in front of an oncoming express train.  The baby, a boy, survives. Mary and Henry adopt him and call him Daniel. Thereafter for about the first half of a book that is ultimately dominated by Daniel, we hear very little about him. There are occasional references to his unusual powers, such as the difficulty Mary and Henry have in appointing a nanny for him, and the ease with which he controls other children in kindergarten. But, for the most part, it is the business dealings of his adoptive parents that are described. We hear plenty about particle physics and the billions of dollars Henry’s small company makes from a high-tech gadget, and the smaller number of dollars - mere millions - that Mary makes by buying and doing up houses, firstly in Los Angeles and then in London.

When Daniel is nearly twelve, he decides he wants to go to boarding school in Switzerland.  A flat is acquired in Geneva to allow Mary, Henry and Daniel to see one another.  Four years later, (page 227) aged sixteen, Daniel is expelled from school for “touching-up” no fewer than seven girls in as many weeks.  From here on we hear plenty about Daniel. He elects to follow his mother into the property developing business whilst simultaneously “touching up plus plus” every starlet in LA. His business is hugely successful, though most of his success depends on his ability to control peoples’ attitudes and moods by changing the aura around them so they comply with his wishes. Woe betide anyone who thwarts his wishes.  They can end up dead - or worse.

It can come as no surprise that this power-crazy man decides to run for president of the USA, or that his rhetoric divides the citizens of his country, or that his initials are DT.

Political satire is not my normal stamping ground, so that may go a long way to explain why I found this book so extraordinary - there were at least two-story threads at the beginning that I never understood. They might have been an early demonstration of baby power or some sinister controller of baby power or a metaphor for the can of worms that Daniel would eventually come to represent. I really have no idea, and other than acting as a possible warning of things to come, they didn’t interfere with the progress of the tale. The book flows merrily along and it is very easy reading.  Mary and Henry are a delightful couple who were obviously made for each other. Sadly, despite doing their best not to spoil Daniel, he still turns into a horrible monster. There are a several other characters scattered about, though none, other than Robyn, a beautiful and clever lassie sent to teach Daniel the basics of becoming a senator, are major players. As befits satire there is a twist at the end.  If satire and mind-changing auras appeal, and you want to know if Daniel achieves his aim of becoming the president of the USA, or whether he gets his come-uppance, then this is definitely the book for you.
------
Reviewer Angela Crowther.

Chris Coppel was born in California and has since split his time between the USA and Europe. Living in California, Spain, France, Switzerland and England. Chris taught advanced screenwriting at the UCLA fi, school. His debut novel, Far From the Burden Dell was published in 2005

Angela Crowther is a retired scientist.  She has published many scientific papers but, as yet, no crime fiction.  In her spare time Angela belongs to a Handbell Ringing group, goes country dancing and enjoys listening to music, particularly the operas of Verdi and Wagner.
Posted by Lizzie at 13:06