‘Murder among Friends’ by Janice Frost 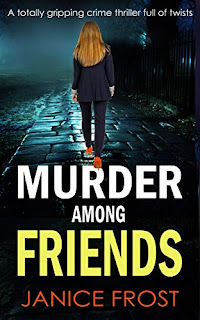 In Murder Among Friends there are two conflicts.  The first is the usual one with police Inspector Steph Warwick and Sergeant Elias Harper trying to establish who is murdering young people in the Cathedral city of Lincoln.  The second is one that attracts less attention in crime fiction. This is the struggle, both professional and personal, between two female police officers, namely Steph Warwick and Jane Bell.  As an inspector in her mid-to-late thirties. Steph has position and power. She is also on the edge of a mental breakdown due to her disastrous relationship with the manipulative and abusive Cal. He is dead, but he still haunts her by day and stops her sleeping at night. In contrast, as a newly appointed special constable, Jane Bell has virtually no standing.  She is in her mid to late forties and has given up teaching after her husband died, though she still coaches English literature students in their homes.

The two ladies meet when Jane arrives first at the scene of the murder of Mark Ripley, a student at the university.  Jane stays with Mark until Inspector Warwick arrives, but annoys her by making suggestions and asking questions. Steph puts her in her place and tell her to go home. Investigations reveal that Mark Ripley has been running a coaching group to teach diffident male students how to pick-up girls in the street, cafes and shops. Two students whom Mark had recruited to help him run his courses, along with others who had been on his courses all become suspects.

Although Steph has told Jane to keep out of the investigation, Jane can’t help remaining curious and having ideas about it. One of her students, sixteen-year-old Thea, has a friend with contacts in the university. She tells Jane that Kylie might be able to help the police identify some of the suspects.  Jane meets Kylie and encourages her to discover the names of boys likely to be involved in harassing girls and murdering Mark. Kylie is murdered. Steph holds Jane responsible for her death and lodges an official complaint against Jane who is suspended from duty. This doesn’t stop Jane from continuing with her own enquiries and playing a major role in bringing the investigation to a hair-raising but satisfactory conclusion. Steph Warwick thanks her – albeit grudgingly.

Full marks to Janice Frost for introducing us to what looks set to turn into an interesting and challenging future relationship between Steph Warwick and Jane Bell. Fortunately, Sergeant Harper seems a very humane character. He may have to adopt the role of peace maker between two strong-willed women, one of whom clearly needs help with maintaining her mental stability. An Artisan blacksmith looks set to keep Jane happy and well-balanced, though this may well have changed by the time we get to the second book in the series.
------
Reviewer Angela Crowther

Angela Crowther is a retired scientist.  She has published many scientific papers but, as yet, no crime fiction.  In her spare time Angela belongs to a Handbell Ringing group, goes country dancing and enjoys listening to music, particularly the operas of Verdi and Wagner.
Posted by Lizzie at 17:05