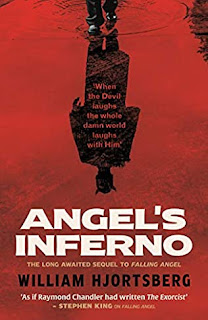 Published by No Exit Press,
28 September 2020.
ISBN: 978-0-85730-413-1 (PB)'When the Devil laughs the whole damn world laughs with him.'   This novel is the long-awaited sequel, in fact a dark sequel, to the chilling, Edgar nominated Falling Angel  - an occult mystery of noir suspense - that led to its 1987 cinema adaption  Angel Heart directed by Alan Parker and starring Robert De Niro and Mickey Rourke.

Harry Angel is a hard-boiled New York private eye.  Although far from squeaky-clean, in this instance he has been arrested for murder and he knows who’s responsible for framing him. He’s determined to seek revenge, and get answers and his mission takes him to the black heart of Satan through America in the mid-fifties to Paris and to the Vatican.

His urgent, macabre journey leads him to self-question his identity and rediscover himself, all the while bamboozling the police who are in hot pursuit. A litany of unlawful killings, not perpetrated by him, continues unabated in his cat and mouse battle with those tailing him.  The story unfolds in unexpected ways. I won’t write a spoiler although suffice to say that a certain evil genius, crooner  Johnny Favorite wants fresh insights fast from Louis Cyphre, who relishes taunting and teasing him.

In classic masterly fashion there are twists and turns along the way; the style and dialogue run smoothly; the characterisation is competent. However, fans of the celebrated Falling Angel may find that in Angel’s Inferno there is an excess of detail that tends to slow the pace. This novel does not have the terrifying brilliance of its prequel and the possibly the rigorous editing that its acclaimed author would have insisted upon had he not, in 2017, sadly died before its publication.

That said it is still worth a read.
------
Reviewer: Serena Fairfax

William Hjortsberg is a novelist and screenwriter best known for writing the screenplays of the movies Legend and Angel Heart. His novel Falling Angel was the basis for the film Angel Heart (1987) (released in French-speaking Canada under the title Aux portes de l'enfer).