‘The Package’ by Sebastian Fitzek 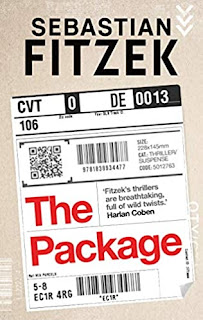 When she was a child living in Berlin, Emma had an imaginary friend, a ghost named Arthur who lived in her wardrobe. However, she freaked out one night when he emerged and was wearing a motorcycle helmet. Her hysterical behaviour led her parents to send her to have psychiatric treatment.

This leads later on in life to her being interested in psychiatry and she becomes Doctor Emma Stein a specialist in psychiatry. For years she has strived to improve the legal status of patients undergoing psychiatric treatment. One evening after having given a lecture on coercive psychiatry, Emma stays in a hotel. The traumatic events of what happens that night in the hotel when she is raped and has her hair shaved off, convince her she has been attacked by the ‘Hairdresser’ a criminal who has treated several other women in the same way. This leads to a paranoia; she believes he will come after her again when she is back home. Emma is terrified to go out and her husband secures their home with fences and alarms. To make it worse, no one actually believes her about the attack as the ‘Hairdresser’ usually murders his victims. How come he let her live?

We then learn as she unfolds the rest of her recollections to her defence lawyer and friend, Konrad, what happened when she accepted a parcel addressed to a neighbour who she is sure doesn't exist.

So begins a series of events that make her realise she should never have taken the package in. Her paranoia increases, even her husband, a police officer, begins to lose patience with her.  Things really get out of hand when she decides to open the package, the worse thing she could have done. People even die because of her action. Emma can trust no one now, even her friend Sylvia has turned against her. The only one reliable person she feels she can depend on is Konrad. Can he find out the truth for her and cure her of her paranoia and clear up the mystery of the package?

Another author I have never come across before and will certainly look out for in the future. I have no hesitation in highly recommending this story for readers who love to be chilled to the bone!
-------
Reviewer: Tricia Chappell

Tricia Chappell. I have a great love of books and reading, especially crime and thrillers. I play the occasional game of golf (when I am not reading). My great love is cruising especially to far flung places, when there are long days at sea for plenty more reading! I am really enjoying reviewing books and have found lots of great new authors.
Posted by Lizzie at 12:55