‘Blood Will Be Born’ by Gary Donnelly 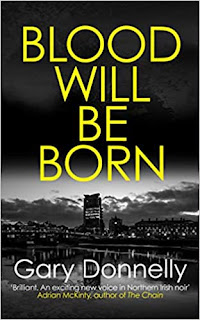 In 1976, at the peak of the Northern Irish Troubles, two men, members of the Provisional IRA, take a young boy with Down’s syndrome out into the countryside. He is, they say, a tout, so they shoot him and bury him in a bog. One of the men, John Fryer, is so overcome with guilt at what he has done (he could just have put the boy on a boat to England, told him to go away and not come back) that it affects his mental stability. In particular, he believes he is haunted by the Moley, a mythical creature believed to pursue people vengefully.

Years later, Fryer is in a mental hospital, apparently more or less catatonic, and unable to care for himself. What connection does this have with a young man, Christopher Moore, a failed artist, son of a Protestant police officer in the RUC who killed himself when the RUC became the Northern Ireland Police Force, and of a Catholic mother, who kills his Protestant grandmother, Esther Moore, a bitter angry woman driven, as many Ulster Protestants were, by hatred of ‘taigs’, their word for Catholics?

We know that it is Christopher Moore who is the link. He is clearly a psychopath with a desire to create political chaos across Northern Ireland which is why, after killing Esther Moore, he leaves a message scrawled on a mirror: Out of Chaos comes Order, taken from the writings of the anarchist philosopher, Frederick Nietsche. In order to realise his fantasies of chaos and bloodshed, he springs Fryer from the mental hospital where he was confined: Fryer is to be the tool whereby Christopher will achieve the bloody chaos of his fantasies.

Detective Inspector Owen Sheen is one of two detectives assigned to investigate the killing of Esther Moore. Sheen is Belfast born but when his brother had been killed by a car bomb while playing football in the street his father had taken him to London to escape the toxic environment of Troubles-riven Belfast. Sheen had joined the Met but after his father’s death he is offered the opportunity to return to Belfast on loan to the NIPF to head up a new outfit, the Serious Historical Offences Team; he grasps the opportunity which he hopes will enable him to find out who was responsible for the car bomb which killed his brother.

Sheen is working on Esther Moore’s murder with DC Aoife McCusker of the Northern Ireland Police Force. This will be her first murder case and he has been told to ‘babysit’ her. But Aoife has a problem. Previously she had had a relationship with a fellow police officer. There are compromising photographs which could, if ever they became public, wreck her career. Now she learns that they have come into the possession of Esther Moore’s other son, Cecil Moore, an alleged former member of the Loyalist Ulster Defence Association and believed to have links with illegal drugs traffickers. She knows that if the investigation into Esther Moore’s death uncovers anything Cecil Moore does not want uncovered; he will use the photographs as blackmail.

Meanwhile, Christopher Moore’s plans to create political turmoil in Northern Ireland are taking shape. He is aiming for the assassination of those politicians of either faction who, after the Peace Process, have taken part in the rebuilding of the province and have at the same time done very nicely for themselves. Further plans include the commission of terrible atrocities. Sheen and Aoife are gradually putting together the pieces of the puzzle but at the same time they both find themselves in considerable danger while John Fryer is wrestling with his own personal demons – will he allow himself to be used by Christopher to create bloody mayhem or will he in the end achieve some sort of redemption?

This is an extremely well-written novel although grim and bleak in some places with graphically-written scenes of extreme violence.
-------
Reviewer: Radmila May

Gary Donnelly is a crime and thriller writer from Belfast who lives and works in London. Blood Will Be Born is the first in the DI Owen Sheen Belfast thriller series, published by Allison and Busby in February 2020.The audiobook, published by Isis Publishing Ltd, is spoken by Irish actor Stephen Armstrong. Adrian McKinty, the award-winning author of The Chain, had this to say about the book: "A twisty, violent, cop thriller set in post-conflict Belfast... Brilliant. Gary Donnelly is an exciting new voice in Northern Irish noir."
Gary attended a state comprehensive school in west Belfast, read History at Corpus Christi College, Cambridge and has lived and worked in London since the late 1990s. In his time, he has been a Belfast cemetery manager, a business conference organiser in the City, a council gardener in Neasdon, and gained a further degree in Psychology, which he teaches in north London. Gary is married to the lovely Sacha and has two children. He can cook up a storm and play a mean guitar (after a few drinks).

Radmila May was born in the U.S. but has lived in the U.K. since she was seven apart from seven years in The Hague. She read law at university but did not go into practice. Instead she worked for many years for a firm of law publishers and still does occasional work for them including taking part in a substantial revision and updating of her late husband’s legal practitioners’ work on Criminal Evidence published late 2015. She has also contributed short stories with a distinctly criminal flavour to two of the Oxford Stories anthologies published by Oxpens Press – a third story is to be published shortly in another Oxford Stories anthology – and is now concentrating on her own writing.
Posted by Lizzie at 15:09