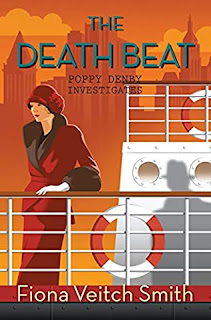 Poppy Denby loves her job in London at the Daily Globe. Her official role is arts and entertainment editor, but she has also proved her ability as an investigative journalist, uncovering the truth behind more than one complex conspiracy. Poppy is both distressed and angry when Rollo Rolandson, the editor in chief and owner of the Daily Globe, gambles away the management of the newspaper to an American rival. Rollo has the chance of regaining the Globe after three months but, until then, he is returning to America to work at the New York Times. Poppy is excited when Rollo invites her to join him at the Times but is disappointed that her boyfriend, Daniel Rokeby, does not wish her to go. Daniel’s negative attitude towards Poppy’s career and his assumption that when they marry she will be content to abandon it and become a housewife, is common for the early 1920s but it results in Poppy and Daniel ending their relationship before she sets off for America.

Despite her sadness in losing Daniel, whom she still loves, Poppy is enchanted to be travelling First Class on the magnificent cruise ship Olympic, especially as her best friend, Delilah Marconi, and her aunt, Dot Denby, have chosen to accompany her. Delilah is an actress and Bright Young Thing, and she encourages Poppy to adopt a lively, modern lifestyle, which results in them becoming friendly with Toby Spencer, the son of a senator, and his cousin, Miles, a film director. Despite her newly discovered pleasure in modern clothes and nightclubs, Poppy retains the compassion and moral strength of her Methodist upbringing, and this causes her to attempt to help Mimi and Estie, two young refugees, when Estie, who has a learning disability, wanders away from boarding for the steerage section and forces her way into the queue for the First-Class passengers.

While Poppy is enjoying an exciting introduction to the upper echelons of New York society, including her first experience of a speakeasy, with the added thrill of a police raid, Mimi and Estie are having a far less enjoyable time. Because of the American policy of not allowing disabled people to enter the country, unless they are US citizens, the sisters are marooned on Ellis Island waiting for Estie to be returned to England. Mimi manages to arrange for them to be smuggled into the country as illegal immigrants, but they have a miserable existence, kept as prisoners and working gruelling hours in a dressmaking factory, until Mimi’s employers demand a further service that is far more objectionable to an innocent young woman. Although Poppy has far less to complain about than Mimi, she is also dissatisfied with her job, because the man who has taken over The Daily Globe took steps to ensure that neither Poppy nor Rollo are given career enhancing positions on the New York Times. Poppy is assigned to the Death Beat, the department that drafts and updates obituaries for important citizens. For most reporters this would slow down their career, but Poppy has an instinct for unearthing newsworthy wrongdoing and soon she and Rollo are investigating an array of crime stories, including a suspicious death. A more personal fear arises when Poppy encounters an old foe who is on the run from the police. This man has attempted to kill her before and Poppy is very much afraid that he is still a threat to her life, but that won’t her following her news-worthy story, whatever the danger.The Death Beat is the third in the series featuring Poppy Denby. It is a beautifully balanced mixture of fictional and real-life characters, with excellent period detail, a well-constructed plot and an engaging protagonist. Poppy is a fascinating mixture of a dedicated investigative journalist, hot on the trail of an exciting story, and a compassionate, empathic, young woman who will reach out to help those less fortunate than herself. The Death Beat is a very enjoyable read, which I recommend.
------
Reviewer: Carol Westron

Carol Westron  is a successful short story writer and a Creative Writing teacher.  She is the moderator for the cosy/historical crime panel, The Deadly Dames.  Her crime novels are set both in contemporary and Victorian times.  The Terminal Velocity of Cats the first in her Scene of Crimes novels, was published July 2013. Carol recently gave an interview to Mystery People. To read the interview click on the link below.
https://promotingcrime.blogspot.co.uk/2017/11/carol-westron.html
www.carolwestron.com
http://carolwestron.blogspot.co.uk/