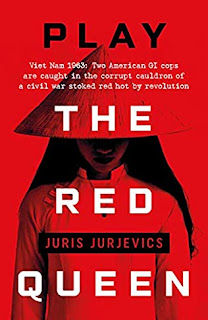 This is the second of the author’s novels that are set in Vietnam.  It’s 1963 and sweltering Saigon is vividly brought to life with all its volatility, corruption, noise, intrigues, and political tension. The country is on the brink of the Vietnam War and several thousand US servicemen are deployed there in a so-called ‘advisory capacity’ propping up the brutal, dictatorial Diem regime and its ruthless military henchmen.

The two protagonists who take centre stage are Staff Serjeant Ellsworth Miser and Serjeant Clovis Robeson, two contrasting American army investigators who are on a mission to track down and take out an audacious, highly skilled, cunning young female Viet Cong assassin.  Her modus operandi involves prowling the boulevards of Saigon in search of unsuspecting members of the American army community who she finishes off with a single shot, a veritable pistol-packing mama, before escaping on the pillion of a moped. She’s nicknamed the Red Queen because she scatters playing cards as she flees the scene of her crime.

Miser and Clovis are as different as chalk is from cheese. One’s white and the other is African American. One’s from a dirt-poor family while the other is monies and privileged. However, together they constitute a formidable duo but they are running out of time as intelligence has reached them that the Red Queen’s next target is likely to be high profile - either Henry Cabot Loge Lodge, the American Ambassador, or Diem himself.

This novel is a posthumous publication and it’s sad that the voice of such a talented writer has been silenced. The author was a Vietnam veteran and a note from his widow  at the end of the book states that Vietnam had marked Juris for life. “In the end it marked him for death as well, through the toll Agent Orange took on his heart.”  He died in 2018. His experiences in Vietnam during those tumultuous fourteen years informed his writing. The book is as much a socio-political history as it is a fast paced thriller with vivid characterisation buttressed by a wealth of detail that flings the reader into the thick of things. All in all a cracking good read
------
Reviewer: Serena Fairfax.

Juris Jurjevics is the author of The Trudeau Vector, which was translated into 9 languages, published in a dozen countries, and optioned for film by National Geographic. His second novel, Red Flags, set in Viet Nam, will be published in September 2011 by Houghton Mifflin Harcourt.  He served in Viet Nam for 14 months, 9 days, 2 hours, his original departure date delayed by the Tet Offensive.  He was born in Latvia, grew up in Displaced Persons camps in Germany.