‘The Good, the Bad, and the Little Bit Stupid’ by Marina Lewycka 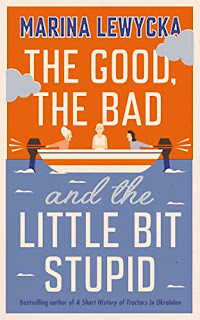 This author, since her first award-winning novel, A Short History of Tractors in Ukrainian, is well-known for writing highly amusing novels which also reveal darker aspects of modern life such as sex-trafficking and exploitative property developers. This novel draws our attention to another aspect, the misuse of the internet for the purposes of financial fraud. It is set partly in Sheffield and partly in an unspecified Balkan country – Kosovo? Albania?

The victim of the fraud is 79-year-old former philosophy lecturer George Pantis (Greek grandfather, hence the surname). He has recently parted company with his wife, the rather younger Rosie: after gradually growing apart the impetus for the split had been a phenomenal row between the two on the subject of Brexit. George had voted for Brexit, Rosie, enraged, had locked him out, whereupon George had taken refuge with their next-door neighbour, Brenda, a hairdresser and keen Brexiteer, all bouffant golden locks and leopard print kitten heels. George and Rosie’s grown-up children are Sid and Cassie (real names Poseidon and Cassiopeia, dating from their parents’ rather airy-fairy world view when they were born). Sid is by nature mundane and cautious; Cassie is ‘woke’ and suffering from a permanent sense of grievance towards the world. Neither child is surprised at the break up of their parents’ marriage. What does surprise them and also Rosie is when George informs them that he has won an enormous sum of money (millions) from the Kosovan State Lottery on a lottery ticket which he cannot remember buying and the money is now in his account and he is looking forward to spending it. Sid tells George that it is undoubtedly a scam and he should have nothing to do with it; he should at least change his bank password. Sid sets up a new password for him, a very long and complicated sequence of words and numbers which George cannot begin to remember.

Then, as if blown in by the wind, George has a series of callers, a couple allegedly from the bank, very pleasant and charming, with strong somewhat Balkan accents. The woman, who is called Afrodita, calls back later and is exceptionally attractive and interested in George’s personal details such as his mother’s maiden name. And there is another woman, a Mrs Patti Smith, owner of a pet grooming salon, who insists that the money is really hers. Afrodita manages to persuade George that the best thing to do, to escape the various rather sinister callers who have been turning up, is to go with her to her own country and when they are there she can help him establish his new password. George, by now completely infatuated with the beautiful Afrodita and forgetting about Brenda, finds himself on the way to Kosovo (or is it Albania? George is so lost in love for Afrodita that he could be setting off for the far side of the moon).

Sensible Sid, however, has done some research into Kosovo and has discovered that not only was it the centre of the third of the Balkan Wars of the 1990s and that its status as a nation has still not been resolved but it is now a centre for criminality of all sorts – sex trafficking, drugs, illegal organ harvesting (especially kidneys), with links to the Italian Mafia and various other mafias. There is nothing for it but for Sid to set off to rescue George, accompanied not only by Rosie and Brenda, bickering ferociously but determined to extract George from the jaws of who knows what, but also by the so-called Patti Smith who is in reality Petra Simic, whose pet grooming salon is actually a brothel in a Sheffield suburb insists on accompanying them – not only does she speak the language but she knows her way around the criminal landscape of the country.

Once in Kosovo (or wherever) the trio are reunited with George but the action descends into chaos: there is a sinister doctor, ready to carry out the organ harvesting with or without anaesthetic, a homicidal nurse, a number of black-clad Balkan gunmen with dark glasses, Afrodita and her aged mother while the potential victims of the doctor include not only young women who have been abducted but a Scottish U.N. official rejoicing in the name of Angus Aberdeen. And hens. Lots of hens, clucking away like mad and getting in everybody’s way. Will it be possible to rescue George and for them all to get back to Sheffield and to Sid’s pregnant girlfriend?

This story is thoroughly enjoyable with lots of laugh-out-loud episodes and a very serious message: every year over £2 billion is lost to financial fraud in the UK. Most of that money is ploughed back into various criminal activities. Warmly recommended.
------
Reviewer: Radmila May

Marina Lewycka is a British novelist of Ukrainian origin, currently living in Sheffield, England. Lewycka was born in a refugee camp in Kiel, Germany after World War II. Her family then moved to England where she now lives. She was educated at Keele University and works as a lecturer in media studies at Sheffield Hallam University. In addition to her fiction, Lewycka has written a number of books giving practical advice for carers of elderly people, published by the charity Age Concern.

Radmila May was born in the U.S. but has lived in the U.K. since she was seven apart from seven years in The Hague. She read law at university but did not go into practice. Instead she worked for many years for a firm of law publishers and still does occasional work for them including taking part in a substantial revision and updating of her late husband’s legal practitioners’ work on Criminal Evidence published late 2015. She has also contributed short stories with a distinctly criminal flavour to two of the Oxford Stories anthologies published by Oxpens Press – a third story is to be published shortly in another Oxford Stories anthology – and is now concentrating on her own writing.
Posted by Lizzie at 18:56