‘The Night the Rich Men Burned’ by Malcolm Mackay 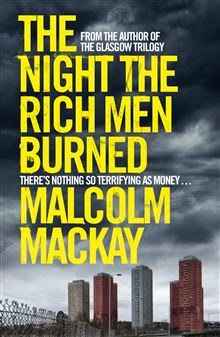 In this noir stand-alone novel, the setting is Glasgow as with the author’s prize-winning trilogy, but this time it could be any big city anywhere in Britain where poverty, hopelessness and drug and alcohol dependency have driven much of the population into the clutches of loan sharks and their enforcers. Two young men, Alex Glass and Oliver Peterkinney, are desperate to escape but with no education and no employment prospects they turn to the only avenue open to them there is and are taken on by one of the city crime lords, Marty Jones. Their first assignment is to beat up one of Marty’s enforcers who has been skimming off money that should have gone to Marty. Despite their rather amateurish approach, they accomplish the job; their reward is to be asked to one of Marty’s ‘parties’ where the main feature is girls whose function is to ‘oblige’ the male participants. Alec falls for one of them, Ella, and she moves into his flat. But for Ollie, still living with his grandfather Arnie, such relationships are a distraction and interfere with his main preoccupation which is to establish himself as a major player in the city’s crime world. So their lives begin to diverge. Glass, absorbed in his relationship with Ella and full of dreams about their future life together, goes to a loan shark to finance their lifestyle. But Oliver plans and schemes to set himself up as an independent enforcers with his own ‘muscle’, a new boy on a block where the existing crime lords are already vying for dominance. As Alec’s life spirals downwards, Oliver’s career seems to be increasingly successful. But what will the existing crime lords, already vying for dominance, make of Oliver’s arrival on the scene? Will they tolerate or even use him, or is he, in a world where no-one trusts anyone and alliances are perpetually shifting, someone to be eliminated? In the end, both lose out to that violent world.

As with the author’s Glasgow trilogy, his writing skills are clearly demonstrated. A telling incident showing his skill at characterisation is that first beating up: Alec goes in with fists flailing but Ollie neatly trips up the target so that he falls down the stairs and injures himself. None of the characters, apart from the hapless Alec and Ella and also Oliver’s grandfather, who despite his own occasional past criminality, really wants his grandson to make a  better life for himself, are remotely likeable. The author’s prose style, as in the earlier books, is a unique mixture of dialogue and interior monologue. In this book that is my only reservation: all the characters (and the story is told from many points of view) think and talk in the same way. And a list of characters who either appear or are referred to would have been helpful. Even on a second read, I wasn’t sure who they all were. Nonetheless, of its type the book it is warmly recommended.

Malcolm Mackay was born and grew up in Stornoway where he still lives. His debut, The Necessary Death of Lewis Winter, marked the beginning of the Glasgow Trilogy, set in the city's underworld and was longlisted for both the CWA John Creasey Dagger for Best Debut Crime Novel of the Year and the CWA Ian Fleming Steel Dagger for Best Thriller of the Year. How a Gunman Says Goodbye is the second of the series.