‘The Killer Trail’ by D B Carew 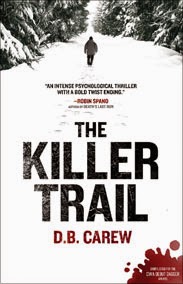 One afternoon, Vancouver psychiatric social worker Chris Ryder is out on a jog along a snowy track when he finds an abandoned mobile phone. Wanting to contact the owner he tries the redial button, and speaks to someone who thinks he is Ray, the owner of the phone. When he realises that Chris is not Ray, he arranges for Chris to meet Ray at the entrance to the park to collect the phone. Chris and Ray speak on the phone; Chris thinks Ray’s voice is familiar but it is not until he finds a body on the trail that he realises that the voice is that of Ray Owens, a former patient at the psychiatric centre where Chris works. Now Chris knows that he is in deadly danger: Owens is a psychopath who likes to kill. Chris manages to get away but Owens has obtained the address of Chris’s estranged wife and beloved young daughter so that they too are in peril. But Owens is playing a strange and tortuous game; he allows himself to be arrested with the intention of manipulating those in authority at the hospital particularly Chris himself for whom he has a particular dislike. The psychological games that Owens plays bring out the darker side of Chris’s character so that he has to battle his own interior demons as well as Owens’s desire for revenge.
The Killer Trail, which was short listed for the CWA Debut Dagger, is a complex narrative in which the author demonstrates his deep knowledge of criminal psychology.
------
Reviewer: Radmila May 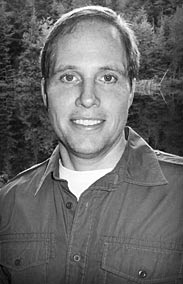 D.B. (Derrick) was born in Newfoundland and Labrador and has called British Columbia, Canada home for the past eighteen years where he lives with his wife and their two children.
D.B. has a Masters Degree in Social Work and has been a social worker at a provincial forensic psychiatric hospital for the past fourteen years.
D.B. is a member of Crime Writers of Canada, the Federation of BC Writers, and Crime Writers’ Association. The Killer Trail was shortlisted in 2013 for the Crime Writers’ Association (CWA) Debut Dagger for unpublished writers, and is scheduled for release by NeWest Press in May 2014.