‘The Firebirds Feather’ by Marjorie Eccles 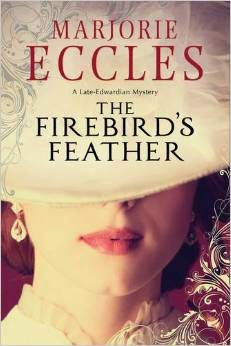 It is May 1911 and Ekaterina ‘Kitty’ Challoner is 18-years-old and looking forward to being presented at court as part of her coming out into London society.  All the arrangements being arranged by Aunt Ursula, Lady Devonish who was to bring Kitty out and act as her chaperone until the end of her first season.  Despite disparaging remarks from cousin Bridget, about the shenanigans of the marriage market Kitty is enjoying the attention and the pretty clothes.

Kitty is aware that Bridget is wearing the wide sash in bands of purple and green signifying her support for the suffragette’s campaign for Votes for Women, and that Aunt Bridget’s son Jon is editing a subversive newspaper. But nothing prepares Kitty for the shattering news that her mother, the beautiful Lydia has been shot while out riding in Hyde Park with  Marcus Villiers, her constant escort.

Initially Kitty’s  father Louis Challoner is suspected, but following his release from the police he shuts himself away leaving his daughter floundering.  Kitty discovers that there is so much she didn’t know about her mother, who was of Russian heritage and still retained links to the mother county. Seeking any answer she asks herself ‘Was Lydia really the killer’s intended target? Is there a link to her Russian heritage? And most frightening of all ‘Was she having an affair with Marcus Villiers?  As Kitty determines to uncover the truth she wonders exactly just who she can trust.

This is an absorbing mystery, as Kitty Challoner seeks to find her mother’s killer, whilst the country prepares for George V’s, coronation and London seethes with unrest as the suffragettes campaign for women to get the vote.  The attentions of Marcus Villiers are confusing, just who is he and exactly what was he to her mother?  Soon she learns that the household in which she lives harbours a number of dangerous secrets.

Kitty Challoner is an engaging heroine, in an engrossing mystery, just who did kill Lydia Challoner and why? Highly recommended.
------
Reviewer: Lizzie Hayes