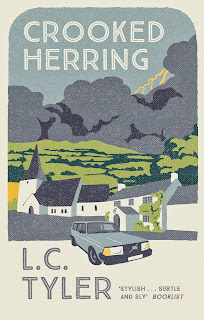 It was with great delight that I opened Crooked Herring and turned to Chapter one, but, no. Wait. There was a prologue.  Personally, I have never taken to prologues, and I approached it with suspicion, but in this instance I can say that it certainly made an impact, and intrigued, I eagerly read on.

When Ethelred Tressider is informed by a fellow crime writer that he thought that he feared that he might have murdered someone on New Year’s Eve, Ethelred is not unsurprisingly - sceptical.  Ethelred feels that a real murderer would be able to keep track of these things. However, Henry Holiday, for it is he that is in the quandary, begs Ethelred to use his powers of investigation to ascertain just what did happen on New Year’s Eve, as he, Henry having consumed copious amounts of alcohol cannot actually recall what happened. He just has some foggy notion that he murdered Crispin Vynall,- yes ,yet another crime writer!

Ethelred embarks reluctantly on this dubious mission, if not exactly accompanied, but certainly directed by, his agent Elsie Thirkettle, by numerous phone calls and the odd lunch for which Ethelred pays.  But the more he investigates the murkier it gets.  Meanwhile, Elsie has done some investigating of her own and made some interesting deductions. But will they help or hinder Ethelred.

Needless to say Ethelred ends up well and truly in the soup.  Elsie’s attempts to extract him from his predicament are clumsy, inventive and convoluted, and for the most part covered in chocolate.  But she does get some satisfying revenge along the way.

This is a marvellous book. The dialogue is sparkling, witty and enormous fun.  I laughed so much I had to stop reading for a while.  The mystery is solved and the ends are tied up satisfactorily but with a jaw-dropping surprise. Most highly recommended.
------ 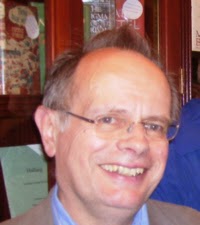 L. C. Tyler was raised in Essex and studied geography at Jesus College Oxford University before going on to study systems analysis at City University in London. He worked for the Bristish Council in Mayaysia, Sudan, Thailand and Denmark, before becoming Chief Executive of the Royal College of Pardiatrics and Child Health, then a full-time writer. Tyler's 2007 novel The Herring Seller's Apprentice was nominated for an Edgar Award for "Best Paperback Original".