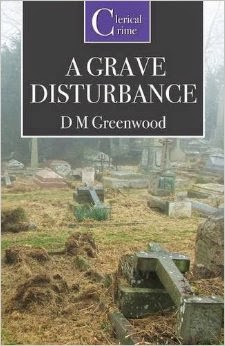 Grave-robbing, attempted fraud, forgery, burglary, dangerous driving, even a murder or two: if you thought the Church of England was a haven of peace, you clearly haven’t been reading D M Greenwood’s witty and sometimes alarming Theodora Braithwaite series.

Theodora, in her everyday life the kind of busy and contented curate one would wish to find in every church, has acquired, mainly by default, a reputation as a spare-time amateur sleuth. She finds it has gone before her when she accepts an invitation to visit an old school friend, and before long she is plunged into a web of intrigue which encompasses all the above crimes.

It all revolves around an apparently accidental death, a cathedral restoration fund and the ownership of a strip of land – and in the approximate words of lay diocesan secretary Lionel Comfet, Theodora’s equally clearsighted temporary sidekick in this book, you’d hardly believe the number of pieces of land the Church doesn’t know it has.

Like the others in this wryly observant series, A Grave Disturbance has a large cast of slightly (but only slightly) hyperbolic characters from all walks of life as well as the upper reaches of the clergy. To name a small sample, there’s a self-made businessman, a primary school head with springs in his feet, a secretary with her own agenda and bizarre ways of working, a taciturn small boy from a traveller family... you get the picture. And as for the clergy: a more self-seeking bunch of incompetents would be hard to find, even in D M Greenwood’s rather jaundiced view of the Church of England.

There’s a cathedral at the centre of the tangled web Theodora is tasked with unravelling, and even that is far from conventional; and the neighbourhood it serves is about as far as it’s possible to get from any cathedral city I’ve ever visited.

As always, D M Greenwood and her down-to-earth protagonist make it all appear, if not exactly normal, then at least quite plausible. Full marks to tiny Ostara Publishing for plucking the series out of obscurity for its Clerical Crime imprint.
------
Reviewer: Lynne Patrick