This novel is set in Southern Rhodesia (now Zimbabwe) during World War II. With the RAF’s major role in the combat and the high attrition rate among aircrews, there was a desperate need to recruit and train more pilots. But trainee pilots need clear skies to train in which Britain’s overcrowded and dangerous skies could not provide. So the Empire Air Training Scheme was set up in Rhodesia, Australia and Canada, all part of the British Empire, in which 37,000+ pilots from many countries were trained. At the same time, as elsewhere, because so many men had been called up, women were recruited into such occupations as aircraft mechanics and the police. It is as one of the latter that Pip Lovejoy is called out when the body of Leading Aircraftswoman Felicity Langham is found in an African township outside Bulawayo. The training school authorities have to be told so Pip and her unpleasant boss Sergeant Hayes inform the adjutant at the training school, Australian Squadron Leader Paul Bryant, of Felicity’s death. Bryant is recovering from a nervous breakdown brought by his previous experiences as a bomber pilot flying sorties over Germany. In the stiff upper lip tradition of the time, he will not admit to his mental anguish but seeks refuge in alcohol and cigarettes and in the meticulous administration of the regulations governing the training school. Further enquiries reveal that Felicity was very much a ‘good-time girl’ with a host of boyfriends, and also that she put on ‘two-woman shows’ in which she parachuted out of a plane piloted by her friend, the wealthy and seductive widow Catherine de Beers. These enquiries lead to the possibility of a plot by the real-life Nazi-sympathetic South African organisation, Ossewa Brandwag (OB), which had previously planned to assassinate the pro-British premier of South Africa, General Jan Smuts; now an OB supporter, Hendrick Reitz, intends similar terrorist attacks in Rhodesia. Parallel with Pip’s and Bryant’s investigations into Felicity’s death, Bryant is concerned about two plane crashes on Catherine’s de Beer’s farm; although the inexperience and rashness of some trainee pilots did result in ‘prangs, sometimes fatal, there are certain elements about these which give rise to doubts. In addition, the growing attraction between Pip and Bryant  is complicated by Bryant’s previous relationships with Felicity and Catherine.

I have to say that, as a thriller African Sky did not grip me very much; the baddies are very obviously very bad from the start while the goodies, Pip and Bryant, for all their personal problems, will clearly win through in the end. That may be a matter of taste. What was I found interesting was the background, the author’s account of aspects of WWII not known by many people, his deep knowledge and skilful description of flying like his powerful depiction of a night bombing raid over Germany, and his portrayal of a society in which casual all-pervasive racism (unpleasant to us now although not as bad as elsewhere in Africa) was the norm (of course Pip and Bryant are exempt from this). In addition the author excels in describing the dramatic terrain and wildlife of Rhodesia, like the terrifying encounter between Bryant and a leopard.
------
Reviewer: Radmila May 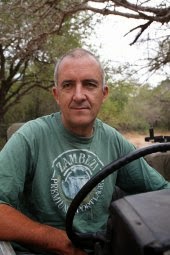 Tony Park was born in 1964 and grew up in the western suburbs of Sydney. He has worked as a newspaper reporter in Australia and England, a government press secretary, a public relations consultant, and a freelance writer. He is also a major in the Australian Army Reserve and served six months in Afghanistan in 2002 as the public affairs officer for the Australian ground forces. He and his wife, Nicola, divide their time between their home in Sydney, and southern Africa, where they own a tent and a Series III Land Rover