‘The Spider of Sarajevo’ by Robert Wilton 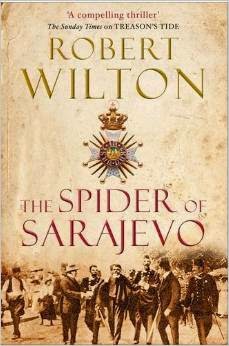 In 1914 a European-wide conflict seemed inevitable. It was necessary, therefore, for each of the likely participants to gather as much information as possible about the preparedness for war of all the others, and to guard against the possibility of those others to find about the state of their own. In Britain, this fell within the ambit of the Comptroller-General for Security and Scrutiny who appears in this novel only as ‘the old man’; we never learn his name. He knows that the Germans have their own ‘spymaster’, one of three men, referred to as ‘the Spider’, controlling a network of German spies in Britain and that Germany is involved in supplying arms to both Loyalists and Nationalists in Ireland which is seething with discontent. So he recruits as agents four people and sends each into Europe to find out what they can. The businessman James Cade is despatched to Constantinople where the once-mighty now decayed Ottoman Empire is tottering and Germany is plotting to involve Turkey on its side and so gain control of the routes to Mesopotamia. Anthropologist Ronald Ballentyne with extensive experience in the Balkans returns to the region where Austria-Hungary, having already absorbed Croatia and Slovenia and, very recently, Bosnia-Herzogovina, has designs on the assertive Serbia, now independent of the Ottoman Empire. David Duval, architect, art-lover, charming but dishonest chancer, but also brave to the point of recklessness goes to Paris, Rome, Berlin - with a diversion to Kiel - St Petersburg and Vienna. The only woman, Flora Hathaway, is sent to Germany with letters of introduction to various influential persons; her cover is that of research into mediaeval German history so that she is invited into the family homes of those she seeks. In the sexist German society of the time, her keen intelligence is ignored. Watching over them all, ensuring their safety as best he can, is Major Valentine Knox, but he knows that the four are not only agents but also bait - flies to be trapped in the Spider’s web so as to lure him out of the shadows and reveal his identity and thus uncover the German spy network in Britain.

This is very much a literary thriller with a highly intricate and exciting plot. It is not an easy read. I had to read it twice to connect all the threads. But that second read was well worthwhile and very enjoyable. The premise of the book is that the Office of the Comptroller-General really did exist and this is backed up by the many documents from the secret files of Britain, Germany and elsewhere in a manner which is totally convincing. It was only when I saw that the Comptroller-General featured in the author’s two earlier novels, Traitor’s Field and Treason’s Tide, with English Civil War and Napoleonic War settings respectively, that I did some very brief research on-line and could discover no trace of either the Office or any of the major characters. So the weight of evidence is somewhat on the side of invention. But, if so, so what? This is a brilliant work of fiction and should be judged as such. And, after all, absence of evidence is not evidence of absence so maybe, maybe .  . . And I did appreciate the teasing references to John Buchan’s Greenmantle and the sad irony that brings the book to its dramatic conclusion in Sarajevo on the very day that the Archduke Ferdinand was assassinated. Highly recommended.
------
Reviewer: Radmila May Robert Wilton has held a variety of posts in the British Ministry of Defence, Foreign Office and Cabinet Office. He was advisor to the Prime Minister of Kosovo in the lead-up to the country's independence, and has now returned there as a senior international official. He divides his time between Kosovo and Cornwall.