‘Speaking From the Bones’ by Alan Bradley 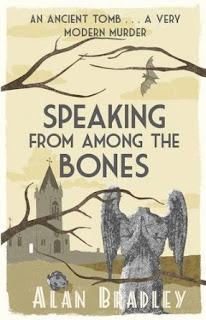 Flavia de Luce, the 11-year-old sleuth who has already shown her detective powers in 5 previous novels by Alan Bradley set in the 1950s in the village of Bishop’s Lacey, finds herself drawn into yet another murder when the 500 hundred-year-old grave of St Tancred  in the village church is opened but the body found is not that of the saint but of the church organist . . . and he has been murdered. Flavia is determined to get to the bottom of the mystery and finds herself exploring the secret maze of tunnels and their connection to the Ridley-Smith family, a family which is, even by the standards of Bishop’s Lacey, bizarre. At every turn she is hindered, not just by her old adversary Inspector Hewitt but by just about everyone in the village even her own sisters who constantly bicker with Flavia. Only two people support her: the family factotum Doggett, and the charming Adam Sowerby, historian and archaeologist, but even he sometimes behaves oddly which leads Flavia to wonder if he is not altogether what he seems.

I must say my heart sank when I realised that the sleuth was an 11-year-old schoolgirl and that the setting was the classic English village; I feared an excess of cuteness. I need not have worried; this is a great read, well-written and extremely amusing. Flavia is a youthful and erudite Sherlock Holmes with an extensive knowledge of chemistry especially poisons. The parade of eccentric characters in Bishop’s Lacey is highly satisfying. Strongly recommended.
------
Reviewer: Radmila May
Other titles by Alan Bradley: The Sweetness at the Bottom of the Pie; A Red Herring without Mustard; The Weed that Strings the Hangman’s Bag; I am Half-Sick of Shadows.

Alan Bradley was born in 1938 in Toronto, Canads. Alongside his two older sisters, Bradley was raised roughly 100 kilometres east of Toronto in the small town of Colbourg, Ontario. His mother brought up the children alone after Bradley's father left the family when Bradley was a toddler. Bradley learned to read at an early age, partly because he was a sickly child who spent a lot of time in bed. However, Bradley confesses to having been a "very bad student", particularly in high school, spending his free time reading in the local cemetery because he felt he didn't fit in. After completing his education, Bradley worked in Cobourg as a radio and television engineer, designing and building electronic systems. He then worked briefly for Ryerson Polytechnical Institute in Toronto (now Ryerson, University), before moving to  Saskatoon to take a job at the University of Saskatchewan in 1969. There he helped develop a broadcasting studio, where he worked as Director of Television Engineering for 25 years. He took an early retirement from the university in 1994 in order to become a full-time writer.