‘An Act of Kindness’ by Barbara Nadel’ 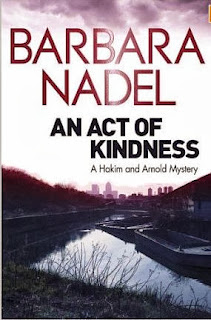 Abdullah Khan, a young solicitor, and his newly-pregnant wife, Nasreen, have bought and are renovating a near-derelict house in London’s East End. Nasreen befriends John, a homeless ex-soldier traumatised by his experiences in Afghanistan, whom she finds living in their wildly overgrown garden but dares not tell Abdullah. But when John is found dead in the nearby old Jewish cemetery Nasreen fears that Abdullah, with his ultra-traditional Islamic values, may have found about John and may have been responsible for his death. So she consults the Arnold Detective Agency, run by ex-policeman Lee Arnold and the widowed Mumtaz Hakim, knowing that as a Muslim woman Mumtaz will be sympathetic. Nasreen, using as a pretext a curious little canister with an old photograph which she has found in the house, asks Mumtaz to look into the house’s history, hopes to find out more about Abdullah’s own background and family about which he is extremely reticent, strangely so for someone from the South Asian community, and about his employers. Another investigation that Mumtaz is undertaking is for Ayesha Mirza (herself white but married to an Asian) who fears that her sister Wendy is being drawn into prostitution by her rackrenting landlords, Sean and Marty Rogers, violent and vicious thugs who run a prostitution racket. But Mumtaz herself has problems: Naz Sheikh who killed Mumtaz’s husband is still persecuting her with financial extortion and threats of violence against her and her daughters. So Mumtaz, who knows rather more about her husband’s death than she ever told the police, is in dire economic straits, and Lee, guessing this, would like to assist.  Meanwhile Lee has been asked by former (but still scary) gangster Brian Green, an ‘uber-Brit, half-man, half bulldog, all malice’, to establish whether or not his young wife is unfaithful. And Lee’s former colleague and occasional bed-partner, DI Vi Collins, is investigating John’s death and the skeleton found with him. And she, like Lee, would dearly like to put an end to the Rogers’ activities.

This second instalment of the Hakim and Arnold series is just as vivid and compelling as the first, although, with its depiction of the violence and cruelty of the organised crime gangs who coerce women into the sex trade and the underlying decades-old criminality of the East End, rather darker in tone. The several story strands, reaching from the present-day into the horrors of the Holocaust, are expertly knotted together, some of which will plainly re-emerge in future Hakim and Lee novels. Lee, with his West Ham supporting mynah bird, is a real Londoner, East End born and bred, sharp-witted yet sympathetic, and Mumtaz, troubled yet caring, are characters I would like to see more of  . . . if not this year then next. Please.
-------
Reviewer: Radmila May
Barbara Nadel’s previous Hakim and Arnold story: A Private Business. She has also published 14 titles in the Inspector Ikmen series (set in Istanbul), and 4 in the Hancock series (set in wartime London). 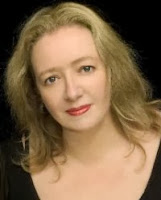 Barbara Nadel was born in the East End of London. She rained as an actress, and used to work in mental health services. She now writes full time and has been a visitor to Turkey for over twenty years. She received the Crime Writers' Association Silver Dagger for her novel Deadly Web.
Posted by Lizzie at 14:42